The submersible robot will guide others in an effort to assess melted fuel that emits fatally high radiation. 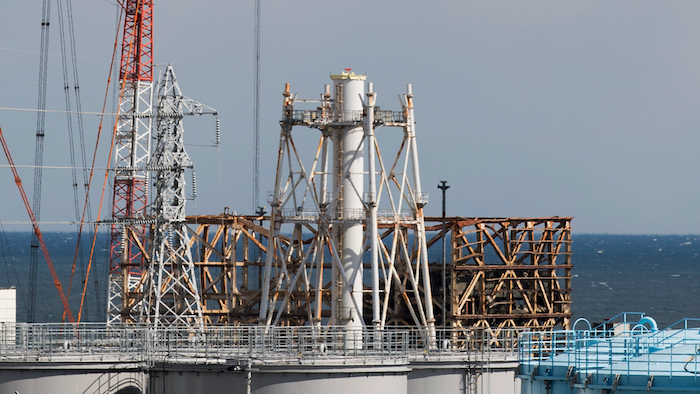 The damaged Unit 1 reactor, back, and the exhaust stack shared with the Unit 1 and 2 reactors at the Fukushima Daiichi nuclear power plant, Okuma town, Japan, Feb. 27, 2021.
AP Photo/Hiro Komae, File

TOKYO (AP) — A remote-controlled robot on Tuesday was used to probe the hardest-hit nuclear reactor at Japan's wrecked Fukushima plant, as officials push forward with clean-up operations that have been mired in delays and controversy.

An earthquake and tsunami in 2011 unleashed a disastrous meltdown at Fukushima Daiichi's three reactors that partly sunk their radioactive cores into the plant's concrete foundations, making removal extremely difficult.

The plant's operator, Tokyo Electric Power Company Holdings, said the submersible robot was sent into Unit 1's primary containment vessel to install a guiding path for five subsequent robots, which will attempt to asses and take samples of the melted fuel that emits fatally high radiation.

Tuesday's probe followed five years after the operators sent another robot into the same and badly-damaged reactor, but failed to get any images of the melted fuel.

The robot-led work, which was postponed from mid-January due to mechanical glitches, is expected to last for a few days before full-fledged probes begin.

Earlier probes showed that the fuel at Unit 1 is submerged by highly radioactive water as deep as 2 meters (6.5 feet).

Five other robots, co-developed by Hitachi-GE Nuclear Energy and the International Research Institute for Nuclear Decommissioning, a government-funded consortium, will be separately sent in for the investigation over the next several months.

The probe at Unit 1 aims to measure the melted fuel mounds, map them in three dimensions, analyze isotopes and their radioactivity, and collect samples, Tokyo Electric officials said.

Those are key to developing equipment and a strategy for a safe and efficient melted fuel removal.

About 900 tons of melted nuclear fuel remain inside the plant's three reactors, including about 280 tons in Unit 1, and its removal is a daunting task that officials say will take 30-40 years. Critics say that’s overly optimistic.

Remote-controlled robots with cameras have provided only a limited view of the melted fuel in areas too dangerous for humans to reach. In 2017, super-high levels of radiation and structural damage hampered investigating Unit 1.

Details of how the highly radioactive material can be safely removed, stored and disposed at the end of the cleanup have not been decided.

Tokyo Electric hopes to use a robotic arm to remove a first scoop of melted fuel later this year from Unit 2, where internal robotic probes have made the most progress.

Fisherman and residents of Fukushima's outlying areas have protested the operator's plans to discharge into the nearby sea radioactive waters from the reactors, after treating and diluting them to safely releasable levels.