They were children at the time of the 2011 nuclear disaster. 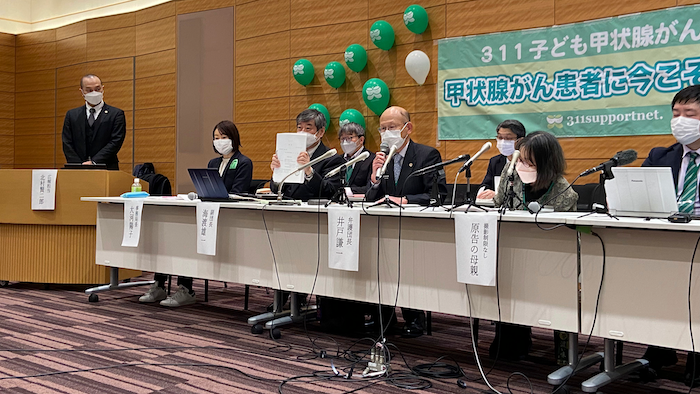 Flanked by other lawyers, a plaintiff and the mother of another, lawyer Yuichi Kaido, third from left, shows a court document during a news conference, Tokyo, Jan. 27, 2022.
AP Photo/Mari Yamaguchi

TOKYO (AP) — Six people who were children living in Fukushima at the time of the 2011 nuclear disaster and have since developed thyroid cancer filed a lawsuit Thursday demanding a utility pay compensation for their illnesses, which they say were triggered by massive radiation.

The plaintiffs, now aged 17 to 27 years, are demanding a total of 616 million yen ($5.4 million) from the Tokyo Electric Power Company Holdings, which runs the the Fukushima nuclear plant.

One of the them, a woman in her 20s, said she was diagnosed with thyroid cancer in 2016 and has since had to change jobs to prioritize her health. She complained of prejudice against thyroid cancer patients.

“I couldn't tell anyone about my cancer because I was afraid of being discriminated against,” she said. “But I decided to come forward and tell the truth in hopes of improving the situation for nearly 300 other people also suffering like us."

Their lawyers said it is the first group lawsuit in Japan filed by Fukushima residents over health problems linked to the nuclear disaster 11 years ago.

The magnitude 9.0 earthquake and tsunami destroyed the Fukushima plant’s cooling systems, triggering triple meltdowns and long-term radiation effects in the region. After massive decontamination efforts, the government has declared most areas — except for the immediate surroundings of the plant — safe and promotes measures to counter “reputational damage” to local agricultural and fisheries products.

In a news conference after filing their case at the Tokyo District Court, one of the plaintiffs and the mother of another said they hoped the court would establish a correlation between the cancer and radiation from the plant. An expert panel commissioned by the Fukushima prefectural government has so far ruled it out.

The plaintiffs, who were 6 to 16 years old at the time of the meltdown, were diagnosed with thyroid cancer between 2012 and 2018, their lawyers said. Four of them had their thyroid fully removed and need lifetime hormonal treatment. One of them says the cancer has since spread. The other two had part of their thyroid removed.

The plaintiffs are from different parts of Fukushima, including Aizu, about 120 kilometers (72 miles) west of the plant, and some of them have since moved to the Tokyo area.

More than 290 people have been diagnosed with or are suspected of having thyroid cancer, including 266 found as part of the Fukushima prefectural panel's survey of some 380,000 residents aged 18 or younger at the time of the disaster.

The occurrence rate of 77 per 100,000 people is significantly higher than the usual 1-2 per million, their lawyers say.

Prefectural officials and experts have said the high detection rate in Fukushima is due to overdiagnosis in many cases, which might have led to unnecessary treatment or surgery. Some also call for an end to the blanket surveys.

Kenichi Ido, one of the plaintiffs' lawyers, said his client's cancer has progressed, that none of the cases involve overdiagnosis and that TEPCO should be held accountable for radiation exposure unless the company can prove otherwise.

TEPCO, in a statement Thursday, apologized for still causing trouble and concerns to the people in Fukushima and elsewhere. It said the company will “respond sincerely” after closely examining the court documents.

After the 1986 Chernobyl disaster, several thousand cases of thyroid cancer linked to radiation exposure were reported, mostly in children and adolescents. Ido said it's unthinkable there are no such cases in Fukushima.

Cancer patients in Fukushima "live in uncertainty, and cannot even think about marriage or having children,” Ido said. Those speaking up are criticized for hampering the area's recovery efforts, he said.

Another lawyer, Yuichi Kaido, said the lawsuit is not only for the six plaintiffs but for hundreds of others with health problems stemming from radiation effects. He said he hoped to establish a medical support system for them.

The government at the time of the accident was slow in its emergency response, and evacuation in many places was delayed due to a lack of disclosure about what was happening at the plant. Residents trying to flee in their cars clogged roads and were stranded for hours outside while radiation leaked from the damaged reactors. Some residents headed to evacuation centers in the direction of the radiation flow.

In a trial seeking criminal responsibility of former TEPCO executives, the Tokyo District Court in 2019 found three top officials not guilty, saying they could not have foreseen the disaster. The case has been appealed to a high court.