An executive order calls for reducing greenhouse gas emissions by 50% compared to 2005 levels by 2030. 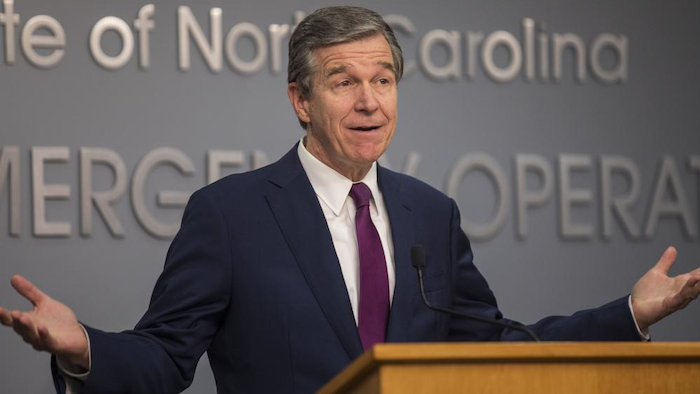 The executive order, signed on the campus of North Carolina A&T State University, attempts to build on the environmental successes the governor had with the legislature in 2021. Landmark legislation to curb dramatically power plant pollution over the next three decades stemmed in part from a Cooper clean-energy order in his first term and a resulting plan developed in part with outside groups and advocates.

And while the 2018 order strives to have at least 80,000 registered electric and other zero-emission vehicles by 2025, this order seeks 1.25 million such vehicles registered by 2030. The sharp uptick in this goal coincides with an effort by automakers to shift away from internal combustion engines. The goals don't have the force of state law to meet.

“This is an important day for our state,” Cooper said at a news conference. “I am excited to see the new green energy jobs ... I do recognize that there is a lot more to do, but I believe it’s important to help establish a framework for all of us to succeed."

Cooper's announcement also comes a month after Toyota announced it would build its first North American battery plant for electric vehicles in Randolph County, with a goal of generating more than 3,800 jobs.

Friday’s order also directs his Cabinet agencies to consider environmental justice challenges when making decisions related to climate change and their response, such as how they will affect minority residents and the poor, and to examine the “social cost” of emissions. Each agency also will assign someone to environmental justice responsibilities.

"I am pleased that it will increase the likelihood that all North Carolinians are able to live in vibrant communities and pursue employment in workplaces free of environmental risks,” James Johnson, chair of the Department of Environmental Quality's Environmental Justice and Equity Board, said in a news release.

The order directs Cooper's Department of Transportation to develop a “Clean Transportation Plan” to reduce carbon emissions through decreasing miles that are traveled on roads, increasing emission-free vehicles and developing other initiatives. The plan needs to be completed by spring 2023.

A state law signed by Cooper in October directs the state's power plants reduce carbon dioxide output 70% from 2005 levels by 2030, and achieve zero-net CO2 emissions by 2050. Coal-fired power plants operated by Duke Energy, the state’s dominant utility, are expected to be retired early as a result.

Several environmental groups, including some that were lukewarm to the power plant law because they felt it wasn't strong enough, lined up Friday to praise the order, particularly on the environmental justice actions.