The report gives no new details on a possible anchor strike suspected to be the cause of the 25,000-gallon spill. 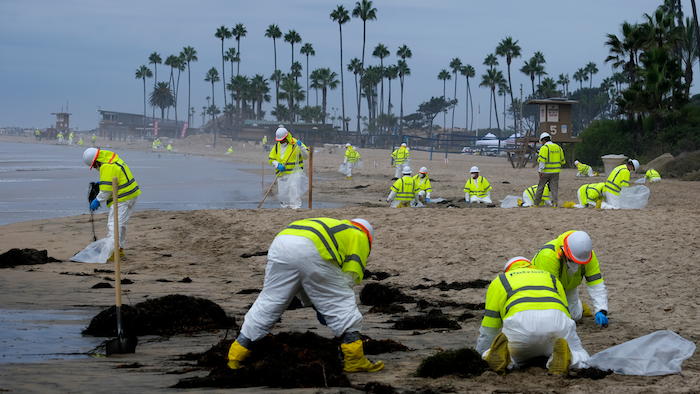 LOS ANGELES (AP) — The ruptured offshore pipeline that spilled tens of thousands of gallons of crude oil off the Southern California coast this fall did not have a fully functioning leak detection system at the time, according to a report obtained by The Associated Press.

The report was compiled by pipeline operator, Beta Offshore, a subsidiary of Houston-based Amplify Energy, and filed with federal regulators. It reveals Amplify is investigating whether personnel or control room issues contributed to the accident but does not explain what was wrong with the detection system.

The report, filed last week and released to the AP under a public records request, gives no new details on a possible anchor strike on the pipeline from a cargo ship suspected to be the cause of the roughly 25,000-gallon (112,000-liter) spill. Coast Guard investigators have said they suspect the pipeline began leaking long after it was snagged by the drifting cargo ship during strong winds in January.

It’s not clear why it took so long for the 1/2-inch (1.25-centimeter) thick steel line to leak, or whether another anchor strike or other incident led to the rupture and spill. But experts say that a properly functioning leak detection system might have been able to catch that things were amiss before an oil sheen spotted on the surface led to the leak’s discovery.

“The fact that they did not have the leak detection system working is surprising,” University of Houston pipeline expert Ramanan Krishnamoorti said, noting that the company’s accounting of the accident appeared inconsistent. “For experienced hands at this, when you’ve got a leak like this, you’d have seen signatures of it with pressure drops and flow rates.”

The spill came ashore at Huntington Beach and forced about a weeklong closure of that city's beaches and others along the Orange County coast. Fishing in the affected area resumed only last week after testing confirmed fish did not have unsafe levels of oil toxins.

In its report, Beta said the pipeline's leak detection system, while not fully functional, still helped to detect and confirm the leak. Federal investigators have previously said a low-pressure alarm went off at 2:30 a.m. on Oct 2, indicating a possible failure.

But in its report the company says the leak wasn't discovered until 8 a.m. that day, by a third-party contractor who reported an offshore slick and notified personnel on a nearby Beta oil platform. The spill wasn't reported to authorities until more than an hour later.

“Amplify continues to remain committed to working with the regulatory agencies investigating this event,” she said.

Accident reports filed with the U.S. Pipeline and Hazardous Materials Safety Administration require companies to disclose the pressure of pipelines that fail. Beta said the line did not exceed maximum pressure but declined to answer what the pressure was when the line leaked. It said it would supplement its response when it determines the exact time the accident occurred.

The break in the pipe that runs along the sea floor 100 feet (30.5 meters) under water was less than one-hundredth of an inch wide (.2 millimeters) and more than 20 inches (50 centimeters) long, the report said. That means the line could have been leaking for hours or days, according to Krishnamoorti and a second expert, pipeline accident consultant Richard Kuprewicz.

“It isn't like a rupture that's wide open, but it's going to move some oil,” Kuprewicz said. He added that the report leaves unresolved questions about the spill and the company's response.

“We don't know how their leak detection system is set up. People think we ought to be able to see a pressure loss, but sometimes pressure loss wouldn't show up even when you have big pipeline ruptures,” he said.

The damaged section of pipeline was expected to be removed under an order from pipeline safety officials that required a metallurgical analysis of why the line failed within 45 days of receiving the Oct. 4 order. However, that hasn't happened.

Amplify attorneys said in a civil lawsuit related to the spill that it is awaiting approval of a repair plan the company submitted to federal officials on Nov. 19.

Because a dive team that was to perform the work was called away by the U.S. Navy to the Persian Gulf, the earliest the repairs would happen would be Dec. 15, and next February is more likely, the company's attorneys said in a report to the federal court filed last week.