Opponents say the expansion should not have gone into service before an environmental study is completed. 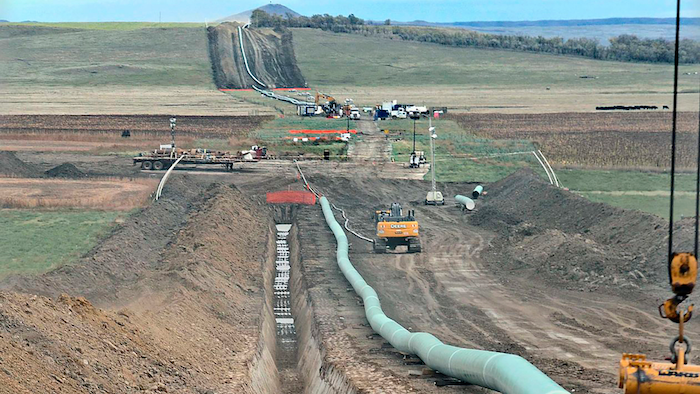 BISMARCK, N.D. (AP) — More oil is being shipped through the Dakota Access Pipeline to the dismay of opponents who say the line expansion should not have gone into service before an environmental study has been completed.

Energy Transfer executives said during a quarterly earnings call this week that the line can now transport 750,000 barrels of oil daily, which is 180,000 more than before. Energy Transfer is adding pump stations to boost the pipeline’s horsepower, and said once the full expansion is up and running, as much as 1.1 million barrels of oil will flow through the pipeline each day.

The Bismarck Tribune reports that the U.S. Army Corps of Engineers is evaluating the expansion in its ongoing environmental study of the line. The study will determine whether the Corps reissues a permit for the line to cross the Missouri River, which was revoked last year after U.S. District Judge James Boasberg ordered the study.

An attorney for the Standing Rock Sioux Tribe, which opposes the line and its expansion, said the purpose of the Corps’ review “is to study the impact of things before they occur, not after.”

“This is outrageous,” attorney Jan Hasselman said after learning that part of the expansion had gone into service. “This is a pipeline that does not have federal permits across the Missouri River. It is subject of a federal enforcement action due to multiple safety violations and instead of dialing back, they’re pushing even more oil through.”

The violations were made public this summer after federal pipeline safety agency inspections in 2019. The federal government has proposed a $93,000 penalty. Energy Transfer says it is addressing the problems, which did not end in leaks.

The Standing Rock Reservation is downstream of where the pipeline passes under the Missouri River, and tribal members are concerned about a potential spill.

Standing Rock Vice Chairman Ira Taken Alive said the expansion increases “the threat to our health and drinking water supply,” and he called on President Joe Biden's administration to shut down the pipeline.

Energy Transfer has said the line is safe. The Corps under Biden has allowed the line to continue operating.