An industry group deployed the vessel to document violations and report them to Customs officials. 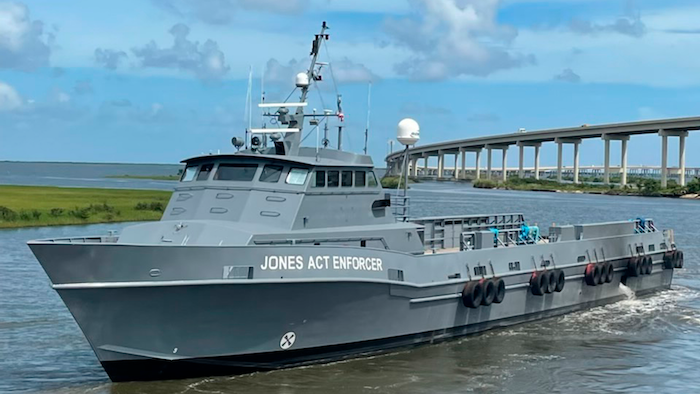 NEW ORLEANS (AP) — Offshore energy service companies are out to find foreign-flagged ships hauling pipeline parts and other energy-related equipment from U.S. ports and delivering or installing them in U.S. waters.

The Offshore Marine Service Association has launched a ship to gather photos and videos of ships it considers to be violating a 1920 law requiring U.S. vessels to carry cargo between U.S. locations. It will provide such evidence to U.S. Customs and Border Protection, which enforces the law, and to trade publications, said Aaron Smith, president and CEO of the association.

He said the Jones Act Enforcer, named after the law, will operate both in the Gulf of Mexico and in wind fields off the East Coast.

“I am absolutely delighted,” said U.S. Rep. John Garamendi, a California Democrat who pushed for an amendment to a law covering the outer continental shelf — the land beneath federal offshore waters — to state that several laws including the Jones Act apply there.

He said he proposed his amendment, which is now law, in part because although it was clear that the Jones Act covered offshore oil and gas, it wasn't clear that it covered the wind industry.

A bill to repeal the Jones Act as a protectionist law that drives up prices is before the Senate Commerce Committee. Such proposals have been made frequently over the past decade but generally haven't made it out of committee, Garamendi said.

Offshore platforms and turbines and everything connected to them should be taken from U.S. ports and delivered or installed by U.S. crews on vessels built and owned in this country, Smith said.

“Many times, foreign vessels take each of those assets from port and then install them,” he said.

His group's 140-plus members include about 60 owners and operators of vessels that carry people, material and supplies to and from offshore rigs and platforms.

Garamendi said the U.S. Customs and Border Patrol has “been a problem for years," by approving dozens of Jones Act loopholes.

“They basically were in the hands of the international companies and would routinely write exemption orders,” he said.

The association has challenged those loopholes in lawsuits and by lobbying members of Congress.

Smith said the Jones Act Enforcer will “show everyone just how many foreign mariners are taking money out of U.S. mariners’ pockets.”

He said the crew’s training, U.S. mariners’ tips, still and video cameras and “aerial assets” are among the crew’s tools.

“We are very confident that we can find and track and document the violations,” Smith said.

Garamendi said, “Somebody's watching them. And that’s a good thing. Because we want American equipment and American jobs to be used in building our future energy sources and industry.”