Six victims were found following the deadly accident, and another seven are still missing and presumed dead. 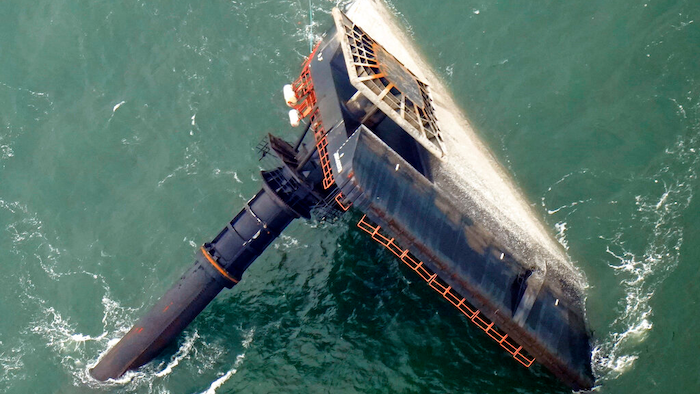 The capsized lift boat Seacor Power is seen seven miles off the coast of Louisiana in the Gulf of Mexico, April 18, 2021.
AP Photo/Gerald Herbert, File

NEW ORLEANS (AP) — An offshore oil industry boat had begun to lower its legs and was trying to turn to face heavy winds when it flipped in the Gulf of Mexico off Louisiana last month, according to a preliminary federal report released Tuesday.

The National Transportation Safety Board report does not discuss the cause of the deadly accident. Six people were rescued, six bodies were found and another seven are still missing and presumed dead. The full investigation could take up to two years.

Lift boats have three or four legs, which tower above a boat that's moving and can be lowered to the bottom to raise the vessel as a temporary offshore platform.

It said other vessels in the area reported winds of more than 80 knots (92 mph, 148 kph), heavy rain and building seas about 3:30 p.m., when the accident occurred.

A rain squall passed over the boat as it moved into the Gulf's open waters, and visibility dropped significantly.

“Crew decided to lower the Seacor Power’s legs to the seafloor to hold the vessel in position until the storm passed. When the legs began to descend, the crewmember at the helm attempted to turn the vessel into the winds. Before the turn was completed, the Seacor Power heeled to starboard and capsized,” the report said.

Several people were able to get out of a corner of the deckhouse that was above water but high winds and 10- to 12-foot (3- to 3.7-meter) seas hampered rescue efforts. One of the survivors was seriously injured, the report said.

“Investigators intend to return to the scene when the Seacor Power is salvaged to inspect the vessel and collect further evidence,” the report said.

Numerous lawsuits have been filed against owner Seacor Marine.

The boat is still where it overturned in the Gulf about 7 miles (11 kilometers) south of Port Fourchon. Salvage workers finished removing about 20,000 gallons (75,700 liters) of diesel from its fuel tanks over the weekend, Petty Officer Cory Mendenhall, a Coast Guard spokesman, said Tuesday.

He said officials haven't decided whether to pump out hydraulic fluid and other petroleum products or leave those in tanks until the Seacor Power is on shore.