Wind turbine blades can collect ice nearly a foot thick on the yard-wide tips of their blades. 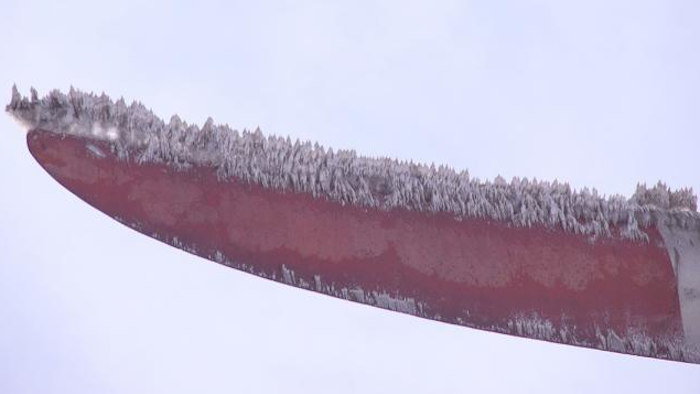 This drone photo from a field study of icing on wind turbines shows how ice accumulated at the tip of a turbine blade during a winter storm.
Hui Hu/Iowa State University

Wind turbine blades spinning through cold, wet conditions can collect ice nearly a foot thick on the yard-wide tips of their blades.

That disrupts blade aerodynamics. That disrupts the balance of the entire turbine. And that can disrupt energy production by up to 80 percent, according to a recently published field study led by Hui Hu, Iowa State University's Martin C. Jischke Professor in Aerospace Engineering and director of the university's Aircraft Icing Physics and Anti-/De-icing Technology Laboratory.

Hu has been doing laboratory studies of turbine-blade icing for about 10 years, including performing experiments in the unique ISU Icing Research Tunnel. Much of that work has been supported by grants from the Iowa Energy Center and the National Science Foundation.

"But we always have questions about whether what we do in the lab represents what happens in the field," Hu said. "What happens over the blade surfaces of large, utility-scale wind turbines?"

We all know about one thing that recently happened in the field. Wind power and other energy sources froze and failed in Texas during last month's winter storm.

Searching for a field site

Hu wanted to quantify what happens on wind farms during winter weather and so several years ago began organizing a field study. But that was more complicated than he expected. Even in Iowa, where some 5,100 wind turbines produce more than 40% of the state's electricity (according to the U.S. Energy Information Association), he wasn't given access to turbines. Energy companies usually don't want their turbine performance data to go public.

So Hu - who had made connections with researchers at the School of Renewable Energy at North China Electric Power University in Beijing as part of an International Research Experiences for Students program funded by the National Science Foundation - asked if Chinese wind farms would cooperate.

Operators of a 34-turbine, 50-megawatt wind farm on a mountain ridgetop in eastern China agreed to a field study in January 2019. Hu said most of the turbines generate 1.5 megawatts of electricity and are very similar to the utility-scale turbines that operate in the United States.

Because the wind farm the researchers studied is not far from the East China Sea, Hu said the wind turbines there face icing conditions more like those in Texas than in Iowa. Iowa wind farms are exposed to colder, drier winter conditions; when winter cold drops to Texas, wind farms there are exposed to more moisture because of the nearby Gulf of Mexico. 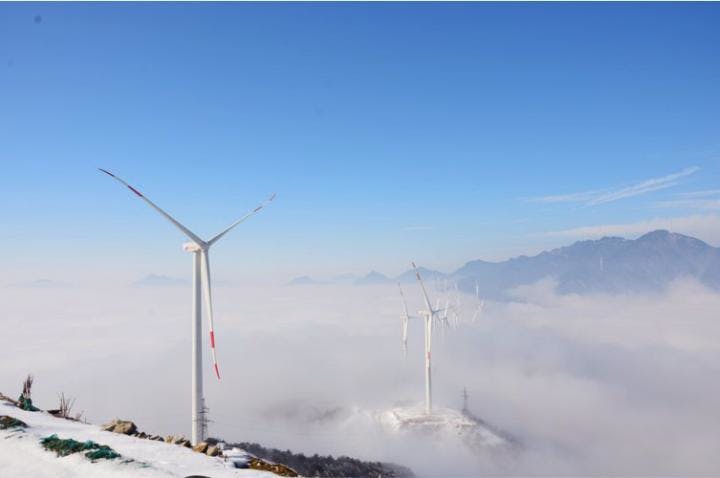 Researchers took to the field to study icing on this ridgetop wind farm in eastern China.Hui Hu/Iowa State University

As part of their field work, the researchers used drones to take photos of 50-meter-long turbine blades after exposure to up to 30 hours of icy winter conditions, including freezing rain, freezing drizzle, wet snow and freezing fog.

The photographs allowed detailed measurement and analyses of how and where ice collected on the turbine blades. Hu said the photos also allowed researchers to compare natural icing to laboratory icing and largely validated their experimental findings, theories and predictions.

The photos showed, "While ice accreted over entire blade spans, more ice was found to accrete on outboard blades with the ice thickness reaching up to 0.3 meters (nearly 1 foot) near the blade tips," the researchers wrote in a paper recently published online by the journal Renewable Energy.

The researchers used the turbines' built-in control and data-acquisition systems to compare operation status and power production with ice on the blades against more typical, ice-free conditions.

"That tells us what's the big deal, what's the effect on power production," Hu said.

The researchers found that icing had a major effect:

"Despite the high wind, iced wind turbines were found to rotate much slower and even shut down frequently during the icing event, with the icing-induced power loss being up to 80%," the researchers wrote.

That means Hu will continue to work on another area of wind-turbine research - finding effective ways to de-ice the blades so they keep spinning, and the electricity keeps flowing, all winter long.