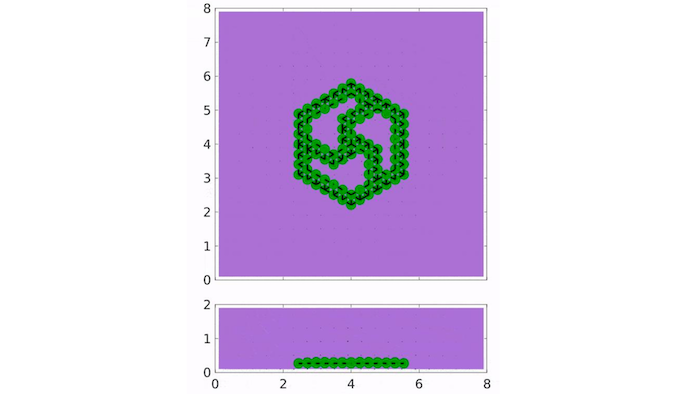 Animation from simulation demonstrating the dynamics of a CAT-coated flexible sheet in H2O2 solution.
A. Laskar/Pitt

PITTSBURGH ... The gear is one of the oldest mechanical tools in human history and led to machines ranging from early irrigation systems and clocks, to modern engines and robotics. For the first time, researchers at the University of Pittsburgh Swanson School of Engineering have utilized a catalytic reaction that causes a two-dimensional, chemically-coated sheet to spontaneously "morph" into a three-dimensional gear that performs sustained work.

The findings indicate the potential to develop chemically driven machines that do not rely on external power, but simply require the addition of reactants to the surrounding solution. Published today in the Cell Press journal Matter (DOI: 10.1016/j.matt.2020.11.04), the research was developed by Anna C. Balazs, Distinguished Professor of Chemical and Petroleum Engineering and the John A. Swanson Chair of Engineering. Lead author is Abhrajit Laskar and co-author is Oleg E. Shklyaev, both post-doctoral associates.

"Gears help give machines mechanical life; however, they require some sort of external power, such as steam or electricity, to perform a task. This limits the potential of future machines operating in resource-poor or remote environments," Balazs explains. "Abhrajit's computational modeling has shown that chemo-mechanical transduction (conversion of chemical energy into motion) at active sheets presents a novel way to replicate the behavior of gears in environments without access to traditional power sources."

In the simulations, catalysts are placed at various points on a two-dimensional sheet resembling a wheel with spokes, with heavier nodes on the sheet's circumference. The flexible sheet, approximately a millimeter in length, is then placed in a fluid-filled microchamber. A reactant is added to the chamber that activates the catalysts on the flat "wheel", thereby causing the fluid to spontaneously flow. The inward fluid flow drives the lighter sections of the sheet to pop up, forming an active rotor that catches the flow and rotates.

"What is really distinctive about this research is the coupling of deformation and propulsion to modify the object's shape to create movement," Laskar says. "Deformation of the object is key; we see in nature that organisms use chemical energy to change their shape and move. For our chemical sheet to move, it also has to spontaneously morph into a new shape, which allows it to catch the fluid flow and perform its function."

Additionally, Laskar and Shklyaev found that not all the gear parts needed to be chemically active for motion to occur; in fact, asymmetry is crucial to create movement. By determining the design rules for the placement, Laskar and Shklyaev could direct the rotation to be clockwise or counterclockwise. This added "program" enabled the control of independent rotors to move sequentially or in a cascade effect, with active and passive gear systems. This more complex action is controlled by the internal structure of the spokes, and the placement within the fluid domain.

"Because a gear is a central component to any machine, you need to start with the basics, and what Abhrajit has created is like an internal combustion engine at the millimeter scale," Shklyaev says. "While this won't power your car, it does present the potential to build the basic mechanisms for driving small-scale chemical machines and soft robots."

In the future, Balazs will investigate how the relative spatial organization of multiple gears can lead to greater functionality and potentially designing a system that appears to act as if it were making decisions.

"The more remote a machine is from human control, the more you need the machine itself to provide control in order to complete a given task," Balazs said. "The chemo-mechanical nature of our devices allows that to happen without any external power source."

These self-morphing gears are the latest evolution of chemo-mechanical processes developed by Balazs, Laskar, and Shklyaev. Other advances include creating crab-like sheets that mimic feed, flight, and fight responses; and sheets resembling a "flying carpet" that wrap, flap, and creep.