Officials warned of possible massive environmental damage if the ship leaks or explodes. 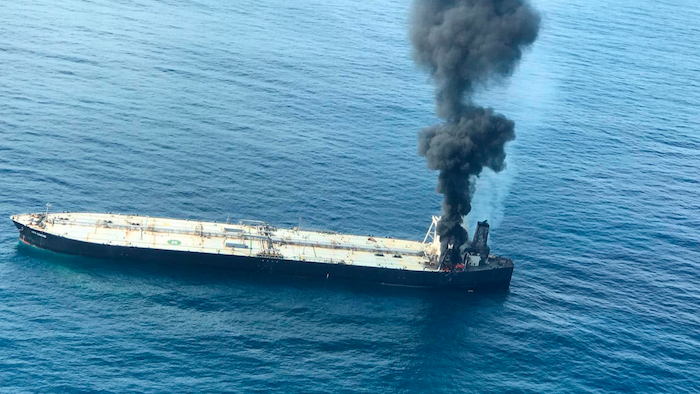 The tanker's third engineer was hospitalized with injuries and another crew member was initially described as missing but later confirmed to have died. Both are Filipino. The condition of the injured crew member is stabilizing, Silva said.

The fire on the MT New Diamond, which began Thursday in an engine room boiler, has not spread to the tanker's oil storage area and no leak has been reported, the navy said.

The head of Sri Lanka's Marine Environment Protection Authority, Darshani Lahandapur, warned that if a leak or explosion occurs, “it could be a huge environmental disaster for the whole world.”

She said Sri Lanka does not have the resources or capacity to combat such a massive disaster, and therefore, “we have informed countries in South Asia to help us if necessity arises. They have responded positively."

She said her organisation plans to take legal action over the fire and has sought legal advice from the attorney general.

Terney Pradeep, the environmental authority’s general manager, said the ship is drifting toward the coast at a speed of 0.7 nautical miles (1.3 kilometers) per hour. “If an oil spill happens after it reaches near the coast, there could be huge damage on the beach,” he said.

The tanker was about 38 nautical miles (70 kilometers) east of Sri Lanka when the fire began. The navy sent four ships in response to the fire on Thursday, and other ships and aircraft from Sri Lanka and India later joined the firefighting efforts.

The tanker had 23 crew members — 18 Filipinos and five Greeks. Twenty-one crew left the tanker uninjured as the fire burned.

The tanker was transporting crude oil from the port of Mina Al Ahmadi in Kuwait to the Indian port of Paradip, where the state-owned Indian Oil Corp. has a refinery.