The blaze forced the evacuation of about 300 people. 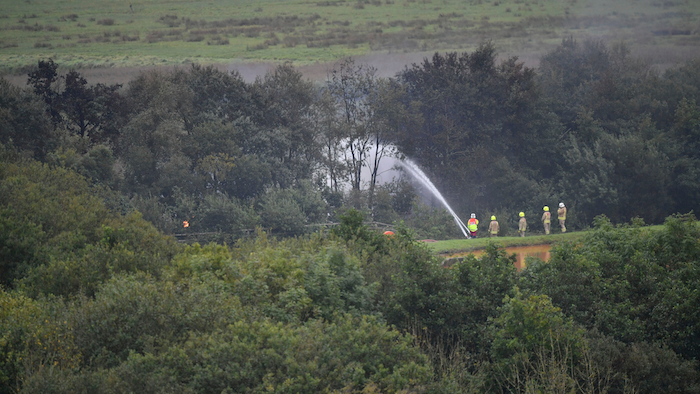 Emergency services at the scene after a fire on a freight train carrying diesel fuel near Llanelli, Wales, Aug. 27, 2020.
Ben Birchall/PA via AP

LONDON (AP) — About 300 people in Wales had to be evacuated after a freight train carrying large amounts of diesel caught fire and derailed, British Transport Police said Thursday.

Officials said two employees onboard managed to raise the alarm and escaped without injury. The fire near Llanelli, in south Wales, was reported close to midnight Wednesday. Three of the train’s cars were still ablaze Thursday afternoon and people were asked to steer clear of the area while firefighters battled the blaze.

Police declared a major incident and asked hundreds of people to move to a nearby school and community center because there was still a “substantial risk” within the immediate area.

“What we know is a freight train, carrying large amounts of diesel oil, caught fire and a number of its carriages also derailed,” Supt. Andy Morgan said. “Thankfully, despite the clear danger, no injuries have been reported.”

“The fire was significant due to the quantity of fuel it was carrying and presented a possible danger to the wider community,” he added.

Authorities were investigating what caused the derailment and resulting fire.