Environmental groups sought to block the Interior Department's plan for oil and gas leases in the Arctic National Wildlife Refuge. 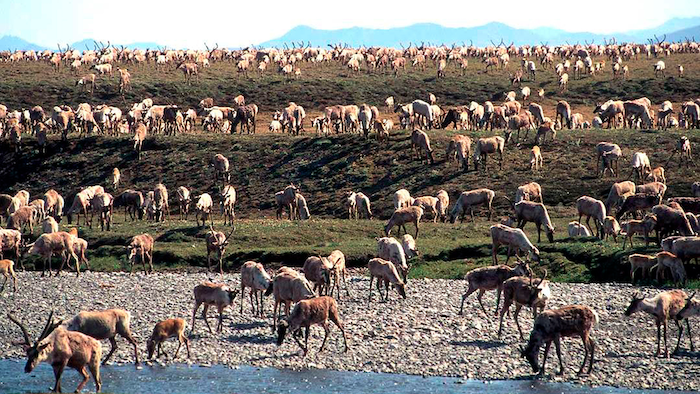 The Porcupine Caribou Herd on the coastal plain of the Arctic National Wildlife Refuge, Alaska.
U.S. Fish and Wildlife Service via AP, File

Two lawsuits filed Monday in U.S. District Court in Anchorage sought to block the Interior Department's plan to allow oil and gas lease sales on the coastal plain of the Arctic National Wildlife Refuge — a 1.56 million-acre strip of land along Alaska’s northern Beaufort Sea coast, or about 8% of the 19.3 million-acre refuge.

“Birds can’t vote, and they can’t file a lawsuit — but we can. This is an all-hands-on-deck moment to defend the Arctic National Wildlife Refuge and protect America’s bird nursery from drilling,” David Yarnold, president and CEO of the National Audubon Society, said in a statement.

The lawsuit asserts that Bernhardt didn't have permission to authorize a broad oil and gas leasing program because it violates government statutes managing the plain. It also claims the program violates the Endangered Species Act and other environmental policies.

In the other lawsuit, the Gwich’in Steering Committee — an Indigenous group formed to protect the refuge — and 12 other groups allege that Bernhardt and the Interior Department's Bureau of Land Management violated several laws, including the Endangered Species Act and the Wilderness Act.

Nearly 200,000 animals in the Porcupine caribou herd, which are also known as reindeer, travel freely between Alaska and Canada and use the coastal plain as calving grounds.

The land agency's “decision to violate lands sacred to my people and essential to the health of the Porcupine caribou herd is an attack on our rights, our culture and our way of life,” Bernadette Demientieff, executive director of the Gwich’in Steering Committee, said in a statement.

“The department’s decision regarding where and when development can take place includes extensive protections for wildlife, including caribou and polar bears,” he said in a statement.

The Bureau of Land Management in December 2018 concluded that drilling could be conducted within the coastal plain without harming wildlife. President Donald Trump insisted Congress include a mandate providing for leasing in the refuge in a 2017 tax bill.