A new material could combine the efficiency of capacitors with the storage capabilities of large batteries. 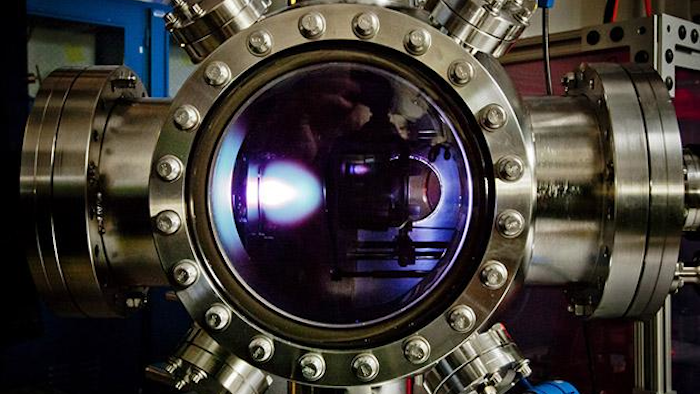 The chamber used for the pulsed-laser deposition process.
Martin/UC Berkeley

Capacitors that rapidly store and release electric energy are key components in modern electronics and power systems. However, the most commonly used ones have low energy densities compared to other storage systems like batteries or fuel cells, which in turn cannot discharge and recharge rapidly without sustaining damage.

Now, as reported in the journal Science, researchers have found the best of both worlds. By introducing isolated defects to a type of commercially available thin film in a straightforward post-processing step, a team led by researchers at the Department of Energy's (DOE) Lawrence Berkeley National Laboratory (Berkeley Lab) has demonstrated that a common material can be processed into a top-performing energy storage material.

The research is supported by the Materials Project, an open-access online database that virtually delivers the largest collection of materials properties to scientists around the globe. Today, the Materials Project combines both computational and experimental efforts to, among other goals, accelerate the design of new functional materials. This includes understanding ways to manipulate known materials in ways that improve their performance.

Growing requirements for cost reduction and device miniaturization have driven a push toward development of high energy density capacitors. Capacitors are commonly used in electronic devices to maintain power supply while a battery is being charged. The new material developed at Berkeley Lab could ultimately combine the efficiency, reliability, and robustness of capacitors with the energy storage capabilities of larger-scale batteries. Applications include personal electronic devices, wearable technology, and car audio systems.

The material is based on a so-called "relaxor ferroelectric," which is a ceramic material that undergoes a rapid mechanical or electronic response to an external electric field and is commonly used as a capacitor in applications like ultrasonics, pressure sensors, and voltage generators.

The applied field drives changes in the orientation of the electrons in the material. At the same time, the field drives a change in the energy stored in the materials, making them a good candidate for use beyond a small-scale capacitor. The problem to solve is how to optimize the ferroelectric so that it can be charged to high voltages and discharged very rapidly - billions of times or more - without sustaining damage that would render it unsuitable for long-term use in applications such as computers and vehicles.

Researchers in the lab of Lane Martin, a faculty scientist in the Materials Sciences Division (MSD) at Berkeley Lab and professor of materials science and engineering at the University of California, Berkeley, accomplished this by introducing local defects that allowed it to withstand bigger voltages.

"You've probably experienced relaxor ferroelectrics on a gas grill. The button that lights the grill operates a spring-loaded hammer that smacks a piezoelectric crystal, which is a type of relaxor, and creates a voltage that ignites the gas," explained Martin. "We've demonstrated that they can also be made into some of the best materials for energy-storage applications as well."

Placing a ferroelectric material between two electrodes and increasing the electric field causes charge to build up. During discharge, the amount of energy available depends on how strongly the material's electrons orient, or become polarized, in response to the electric field. However, most such materials typically cannot withstand a large electric field before the material fails. The fundamental challenge, therefore, is to find a way to increase the maximum possible electric field without sacrificing the polarization.

The researchers turned to an approach that they had previously developed to "turn off" conductivity in a material. By bombarding a thin film with high-energy charged particles known as ions, they were able to introduce isolated defects. The defects trap the material's electrons, preventing their motion and decreasing the film's conductivity by orders of magnitude.

"In ferroelectrics, which are supposed to be insulators, having charge that leaks through them is a major issue. By bombarding ferroelectrics with beams of high-energy ions, we knew we could make them better insulators," said Jieun Kim, a doctoral researcher in Martin's group and lead author on the paper. "We then asked, could we use this same approach to make a relaxor ferroelectric withstand bigger voltages and electric fields before it catastrophically fails?"

The answer turned out to be "yes." Kim first fabricated thin films of a prototypical relaxor ferroelectric called lead magnesium niobite-lead titanate. Then, he targeted the films with high-energy helium ions at the Ion-Beam Analysis Facility operated by the Accelerator Technology and Applied Physics (ATAP) Division at Berkeley Lab. The helium ions knocked target ions from their sites to create point defects. Measurements showed that the ion-bombarded film had more than twice the energy storage density of previously reported values and 50 percent higher efficiencies.

"We were originally expecting the effects to be mostly from reducing the leakage with isolated point defects. However, we realized that the shift in the polarization-electric field relationship due to some of those defects was equally important," said Martin. "This shift means that it takes larger and larger applied voltages to create the maximum change in polarization." The result suggests that ion bombardment can help to overcome the trade-off between being highly polarizable and easily breakable.

The same ion beam approach could also improve other dielectric materials to improve energy storage, and provides researchers with a tool to repair problems in already-synthesized materials. "It would be great to see folks use these ion-beam approaches to 'heal' materials in devices after the fact if their synthesis or production process didn't go perfectly," said Kim.