The grippers are grown on optical fibers and operated remotely without wiring or pneumatic tubing. 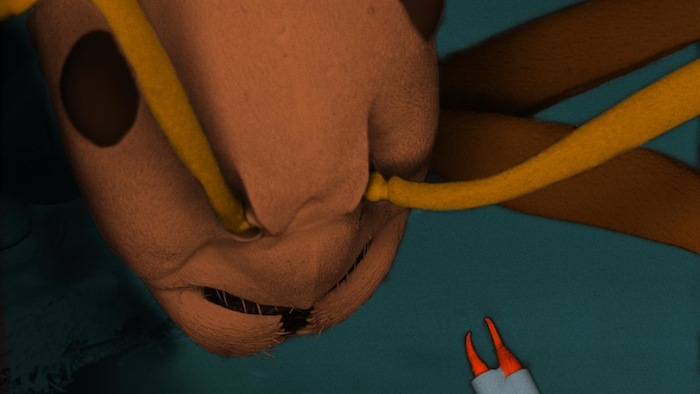 The optical pliers next to the mandibles of a Formica polyctena ant for comparison.
UW Physics

Researchers at the Faculty of Physics, University of Warsaw, used the liquid crystal elastomer technology to demonstrate a series of micro-tools grown on optical fibers. The 200-micrometer grippers are controlled remotely, without electric wiring or pneumatic tubing, with green light delivered through the fibers - absorbed light energy is directly converted into the gripper jaws' action.

Gripping objects is a fundamental skill for living organisms, from the microscopic rotifers, through the amazing dexterity of the human hand, to the jaws of predatory whales and soft tentacles of giant squids, and is also vital for many ever-shrinking technologies. Mechanical grippers, powered by electric, pneumatic, hydraulic or piezoelectric servos, are used at scales down to millimeters, but their complexity and need for force transmission prevent miniaturization.

Researchers at the Faculty of Physics at the University of Warsaw with colleagues from the AGH University of Science and Technology in Cracow, Poland have now used liquid crystal elastomer microstructures that can change shape in response to light to build a light-powered micro-tool - optical pliers. The device was built by growing two bending jaws on the tips of hair-sized optical fibers.

Liquid Crystalline Elastomers (LCEs) are smart materials that can reversibly change shape under illumination with visible light. In their prototype, scientists combined the light-powered LCEs with a novel method of fabricating micrometer-scale structures: when UV light is sent through the optical fiber, a cone-shaped structure grows at the fiber tip. The light-induced mechanical response of thus grown micro-structure depends on the orientation of molecules inside the elastomer element and can be controlled to get bending or contracting micro-actuators. The new elastomer growth technique readily offers a variety of micrometer-scale, remotely controlled functional structures - building blocks for the micro-toolbox.

The research on light-powered elastomer microstructures is funded by the National Science Center (Poland) within the project "Micro-scale actuators based on photo-responsive polymers".

Physics and Astronomy first appeared at the University of Warsaw in 1816, under the then Faculty of Philosophy. In 1825 the Astronomical Observatory was established. Currently, the Faculty of Physics' Institutes include Experimental Physics, Theoretical Physics, Geophysics, Department of Mathematical Methods and an Astronomical Observatory. Research covers almost all areas of modern physics, on scales from the quantum to the cosmological. The Faculty's research and teaching staff includes ca. 200 university teachers, of which 87 are employees with the title of professor. The Faculty of Physics, University of Warsaw, is attended by ca. 1000 students and more than 170 doctoral students.