The report could bring scientists closer to a battery made from abundant, cheap materials. 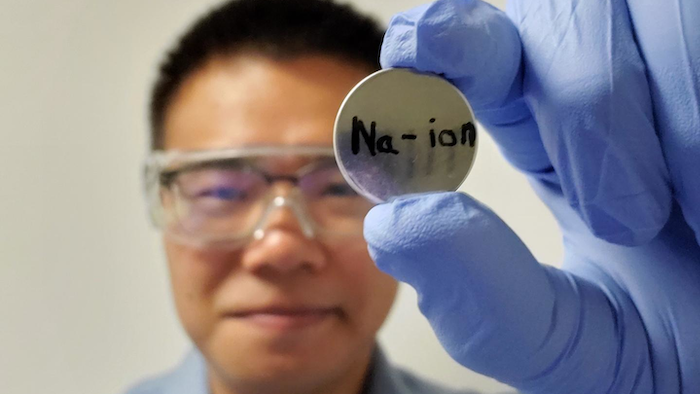 WSU PhD graduate Junhua Song and colleagues created a sodium-ion battery that holds as much energy and works as well as some commercial lithium-ion battery chemistries.
Washington State

PULLMAN, Wash. - Washington State University (WSU) and Pacific Northwest National Laboratory (PNNL) researchers have created a sodium-ion battery that holds as much energy and works as well as some commercial lithium-ion battery chemistries, making for a potentially viable battery technology out of abundant and cheap materials.

The team reports one of the best results to date for a sodium-ion battery. It is able to deliver a capacity similar to some lithium-ion batteries and to recharge successfully, keeping more than 80 percent of its charge after 1,000 cycles. The research, led by Yuehe Lin, professor in WSU's School of Mechanical and Materials Engineering, and Xiaolin Li, a senior research scientist at PNNL is published in the journal, ACS Energy Letters.

"This is a major development for sodium-ion batteries," said Dr. Imre Gyuk, director of Energy Storage for the Department of Energy's Office of Electricity who supported this work at PNNL. "There is great interest around the potential for replacing Li-ion batteries with Na-ion in many applications."

Lithium-ion batteries are ubiquitous, used in numerous applications such as cell phones, laptops, and electric vehicles. But they are made from materials, such as cobalt and lithium, that are rare, expensive, and found mostly outside the US. As demand for electric vehicles and electricity storage rises, these materials will become harder to get and possibly more expensive. Lithium-based batteries would also be problematic in meeting the tremendous growing demand for power grid energy storage.

On the other hand, sodium-ion batteries, made from cheap, abundant, and sustainable sodium from the earth's oceans or crust, could make a good candidate for large-scale energy storage. Unfortunately, they don't hold as much energy as lithium batteries.

They also have trouble being recharged as would be required for effective energy storage. A key problem for some of the most promising cathode materials is that a layer of inactive sodium crystals builds up at the surface of the cathode, stopping the flow of sodium ions and, consequently, killing the battery.

"The key challenge is for the battery to have both high energy density and a good cycle life," said Junhua Song, lead author on the paper and a WSU PhD graduate who is now at Lawrence Berkeley National Laboratory.

As part of the work, the research team created a layered metal oxide cathode and a liquid electrolyte that included extra sodium ions, creating a saltier soup that had a better interaction with their cathode. Their cathode design and electrolyte system allowed for continued movement of sodium ions, preventing inactive surface crystal build-up and allowing for unimpeded electricity generation.

"Our research revealed the essential correlation between cathode structure evolution and surface interaction with the electrolyte," Lin said. "These are the best results ever reported for a sodium-ion battery with a layered cathode, showing that this is a viable technology that can be comparable to lithium-ion batteries."

The researchers are now working to better understand the important interaction between their electrolyte and the cathode, so they can work with different materials for improved battery design. They also want to design a battery that doesn't use cobalt, another relatively expensive and rare metal.

"And, that would be a game changer," he added.