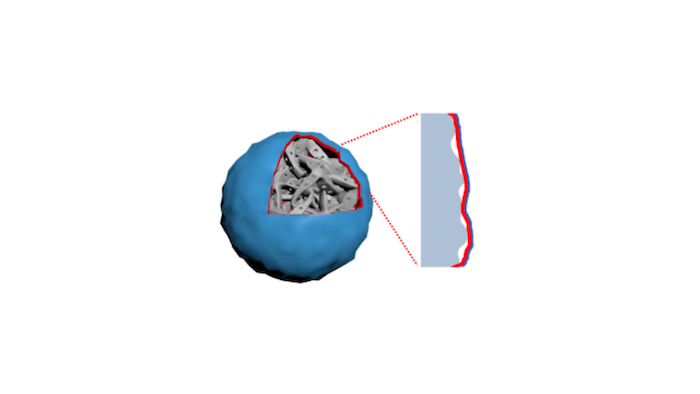 Nanoparticles of silicon in a battery as the anode are protected by a layer forming naturally from a newly-designed electrolyte.
University of Maryland

COLLEGE PARK, Md. - Lithium ion batteries have already become an integral part of our everyday life. However, our energy-hungry society demands longer life, faster charging, and lighter batteries for a variety of applications from electric vehicles to portable electronics, including lightening the load a soldier carries as numerous electronics become adopted by the Army.

Can we get closer to such lighter and faster-charging batteries? The current generation of lithium ion batteries uses graphite as an anode, which has a relatively low capacity, and could be replaced with a silicon anode with high capacity and low environmental impact. This is a highly promising direction for research - yet elusive, as batteries with silicon anodes with a large particle size tend to have shorter lives, generally less than 50 cycles. When researchers tried using nanoparticles of silicon, aluminum, and bismuth, they found that these nano-sized alloy anodes still suffer short cycle life and high cost. Chunsheng Wang and his colleagues may have found a new direction for fixing this degradation problem: the electrolyte.

The team from the University of Maryland and the Army Research Laboratory have made an electrolyte that forms a protective layer on silicon, which is stable and resists the swelling that occurs in silicon anode particles. The new electrolyte - rationally designed with underlying principles in place - gives the anode particles room for Si to swell insight the protected layer. The results were published in the journal Nature Energy on April 20, 2020.

Dr. Ji Chen, a lead author of the paper from the Department of Chemical and Biomolecular Engineering at the University of Maryland, said, "Our research proves that it is practical and possible to stably cycle silicon, aluminum, and bismuth particles as lithium ion battery anodes, simply with a rationally designed electrolyte, which has been regarded as unachievable before."

"Current efforts by combination of molecular modeling and experimental provided a clear path to a new direction to rationally design the electrolytes that enable long cycle life for high capacity silicon anodes opening a path to developing high energy batteries for a warfighter, " said Dr. Oleg Borodin, a collaborator from the Army Research Laboratory.

Current electrolyte design for siliconi anodes aims to form a uniform polymer layer called the solid electrolyte interface or SEI that is flexible and strongly bonds with silicon. However, the strong bonding between polymer SEI and silicon forces the SEI to have the same volume change as the anode particles, so both the particles and the SEI crack during battery operation.

"After extensive research on silicon electrodes, the battery community has reached a consensus that the micro-sized silicon anodes cannot be used in commercial lithium-ion batteries," said Chunsheng Wang, a professor of Chemical and Biomolecular Engineering at the University of Maryland. "We successfully avoided the SEI damage by forming a ceramic SEI that has a low affinity to the lithiated silicon particles, so that the lithiated silicon can relocate at the interface during volume change without damaging the SEI. The electrolyte design principle is universal for all alloy anodes, and opens a new opportunity to develop high energy batteries."

Challenges still remain for the commercialization of the electrolyte, the voltage window of 4.2V still needs to be expanded, Wang said.