Calls for a 'Green Recovery' from Pandemic

Rather than aim for a return to business as usual, officials said recovery programs should invest in future-proof jobs. 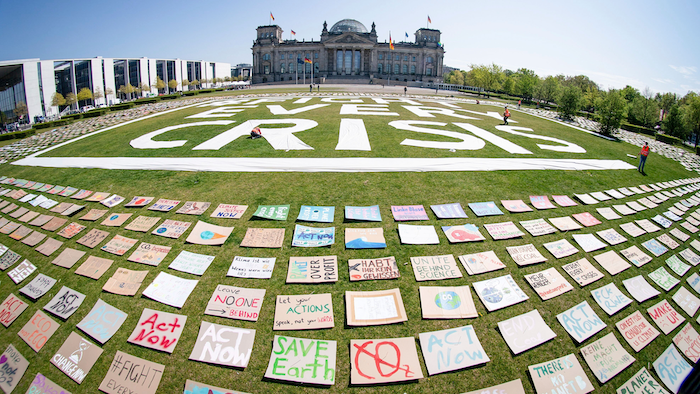 Activists from the Fridays for Future movement placed protest in front the German parliament building in Berlin, April 24, 2020.
Kay Nietfeld/dpa via AP

BERLIN (AP) — Germany and Britain said Monday that efforts to revive the global economy in the wake of the coronavirus pandemic must ensure a ‘green recovery' that helps the world tackle climate change.

Speaking ahead of a virtual meeting of officials from some 30 countries, Germany's environment minister said it was important for economic recovery programs to invest in future-proof jobs that would help reduce greenhouse gas emissions in coming years, rather than aim for a return to business as usual.

“We mustn't invest in technologies of the past,” Svenja Schulze told The Associated Press, noting that some countries are holding onto plans to build new coal-fired power plants.

Some German politicians have called for stimulus money to be spent on subsidizing car purchases, to boost the country’s auto industry.

Schulze suggested that one way to do this would be to help care workers buy electric vehicles for house calls. “These are many, many vehicles,” she told The AP. “It would help the economy and it would move us forward (in curbing emissions).”

Scientists have warned that there's little time left if the world wants to achieve the headline goal of the 2015 Paris climate accord — keeping global warming well below 2 degrees Celsius (3.6 Fahrenheit), ideally 1.5 C (2.7 F).

Some have also likened the strategy adopted by countries in fighting the pandemic — the idea of flattening the curve of infections so health systems don’t collapse — to the need to bring down the rate of greenhouse gas emissions that are driving global warming.

Britain’s Business Secretary Alok Sharma, who is co-hosting the two-day talks, said that “the world must work together, as it has to deal with the coronavirus pandemic, to support a green and resilient recovery, which leaves no one behind.”

Environmental campaigners have warned that heavily polluting industries are already seeking to tap into the vast sums being lined up by governments to stimulate the economy.

“We are seeing the internal documents from industries indicating that they are trying to use this moment where public money is being put back into the economy to prop up their industries, whether it be the aviation industry... (or) the oil industry,” said Jennifer Morgan, executive director of Greenpeace International.