Watchdogs worry employee exhaustion could increase the risks of accidents. 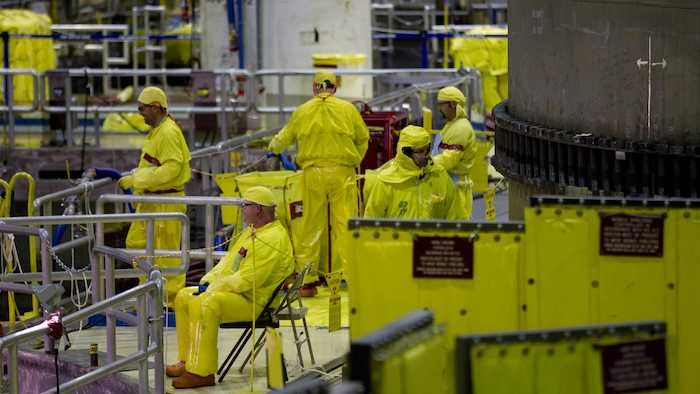 Workers gather near the Unit 2 reactor at the Browns Ferry nuclear plant in Athens, Ala., March 25, 2011.
AP Photo/Dave Martin, File

WASHINGTON (AP) — U.S. nuclear plants will be allowed to keep workers on longer shifts to deal with staffing problems in the coronavirus pandemic, raising worries among watchdogs and some families living near reactors that employee exhaustion will increase the risks of accidents.

The Nuclear Regulatory Commission’s decision to temporarily allow longer worker shifts is one way the industry is scrambling to keep up mandatory staffing levels through what will be weeks or months more of the outbreak.

The shift extensions would allow workers to be on the job for up to 86 hours a week. Currently, they’re generally allowed to work up to 72 hours in a seven-day period. As part of the waiver, workers could be assigned to 12-hour shifts for as many as 14 days in a row.

Nuclear plant workers already are having their temperatures checked on arrival for each shift, and employers are studying options including having workers temporarily live at plants full-time.

Ho Nieh, the NRC's director of reactor regulation, discussed the provision for longer work hours with utility industry executives and others on Thursday. Nieh said federal inspectors on and off site would monitor so that no plant works its employees to the point of bleariness. Regulators would approve, and if needed revoke, expanded shifts on a plant-by-plant basis, Nieh said.

But for Natalie Hildt Treat, a resident of Salisbury, Massaschusetts who is staying at home during the outbreak with her 5-year-old child and husband, the thought that workers at plants such as Seabrook Station, 6 miles away, could soon be grinding through repeated long shifts only added to her concerns.

“This is highly specialized work that needs a lot of attention and focus,” Treat, a nuclear safety activist, said by telephone. It’s a problem, she said, “if people are fatigued or sick.”

There are nuclear reactors in 30 states. In 12 states, nuclear plants provide 30 percent or more of their power. Like the coal industry, however, the U.S. nuclear power industry has struggled in the marketplace as prices of natural gas and renewable energy plunge.

The NRC closely regulates total staffing and staff hours as a condition of reactors' continued operation. Fatigue has often been deemed a factor in accidents at nuclear plants, as in the former Soviet Union’s 1986 Chernobyl disaster, where key plant staffers had worked multiple shifts.

In the United States in recent days, nuclear plants are reporting some of the first coronavirus cases among their workers.

Over the weekend, the NRC said it would consider on a plant-by-plant basis 60-day exemptions that would let plants keep workers on the job for up to 86 hours in a seven-day period, including up to 12 hours a day for 14 days straight. No plant had received a work-hour waiver as of Thursday, regulators said.

With the expanded hours, managers could shift nuclear plants from five or six crew rotations a day to two — a day shift and a night shift, of 12 hours, Thomas Basso, the senior director of regulatory affairs at the industry’s Nuclear Energy Institute, told regulators Thursday.

That way, plants could minimize exposures and risks of infection among workers, Basso said, increasing the chances of keeping enough workers healthy however long the pandemic lasts.

“The industry will only ask for these exemptions provided safety is ensured,” said Jennifer Uhle, a vice president of the nuclear industry group.

But Edwin Lyman, a nuclear power expert with the Union of Concerned Scientists watchdog group, called proposals like Basso’s “alarming.”

“I hope that the NRC will conduct due diligence on industry claims that the best way to reduce the potential for COVID-19 spread among its personnel is to force them to work fourteen 12-hour days in a row,'' he said in an email. He called that solution likely “untenable.”

If a plant fails to keep up minimum staffing requirements in the pandemic, regulators could order it to shut down, something that has happened rarely, if ever, to an operating plant, regulators said.

Besides the kind of crew consolidation Basso described, individual nuclear plants also are looking at the possibility of bringing former plant operators back into service. Another option is sequestering crews on site — keeping workers fed and bunked down at the plants during the pandemic, NEI spokeswoman Mary Love said.

At the Tennessee Valley Authority's three nuclear facilities in Tennessee and Alabama, crews on Thursday were again checking the temperature of each arriving worker and having each fill out a health questionnaire, every day, spokesman Jim Hopson said.

Managers had restricted movement within parts of the sites, and put cleaners on extra hours inside, Hopson said. Sequestering crews remained one of the options, if things get worse, he said.