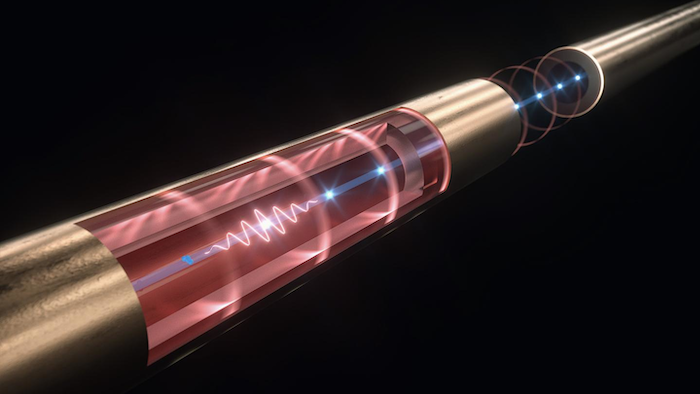 A team of DESY scientists has built a miniature double particle accelerator that can recycle some of the laser energy fed into the system to boost the energy of the accelerated electrons a second time. The device uses narrowband terahertz radiation which lies between infrared and radio frequencies in the electromagnetic spectrum, and a single accelerating tube is just 1.5 centimeters long and 0.79 millimeters in diameter. Dongfang Zhang and his colleagues from the Center for Free-Electron laser Science (CFEL) at DESY present their experimental accelerator in the journal Physical Review X.

The miniature size of the device is possible due to the short wavelength of terahertz radiation. "Terahertz-based accelerators have emerged as promising candidates for next-generation compact electron sources," explains Franz Kärtner, Lead Scientist at DESY and head of the CFEL group that built the device. Scientists have successfully experimented with terahertz accelerators before, which could enable applications where large particle accelerators are just not feasible or necessary. "However, the technique is still in an early stage, and the performance of experimental terahertz accelerators has been limited by the relatively short section of interaction between the terahertz pulse and the electrons," says Kärtner.

For the new device, the team used a longer pulse comprising many cycles of terahertz waves. This multicycle pulse significantly extends the interaction section with the particles. "We feed the multicycle terahertz pulse into a waveguide that is lined with a dielectric material", says Zhang. Within the waveguide, the pulse's speed is reduced. A bunch of electrons is shot into the central part of the waveguide just in time to travel along with the pulse. "This scheme increases the interaction region between the terahertz pulse and the electron bunch to the centimeter range - compared to a few millimeters in earlier experiments," reports Zhang.

The device did not produce a large acceleration in the lab. However, the team could prove the concept by showing that the electrons gain energy in the waveguide. "It is a proof of concept. The electrons' energy increased from 55 to about 56.5 kilo electron volts," says Zhang. "A stronger acceleration can be achieved by using a stronger laser to generate the terahertz pulses."

The set-up is mainly designed for the non-relativistic regime, meaning the electrons have speeds that are not so close to the speed of light. Interestingly, this regime enables a recycling of the terahertz pulse for a second stage of acceleration. "Once the terahertz pulse leaves the waveguide and enters the vacuum, its speed is reset to the speed of light," explains Zhang. "This means, the pulse overtakes the slower electron bunch in a couple of centimeters. We placed a second waveguide at just the right distance that the electrons enter it together with the terahertz pulse which is again slowed down by the waveguide. In this way, we generate a second interaction section, boosting the electrons' energies further."

In the lab experiment, only a small fraction of the terahertz pulse could be recycled this way. But the experiment shows that recycling is possible in principle, and Zhang is confident that the recycled fraction can be substantially increased. Nicholas Mattlis, senior scientist and the team leader of the project in the CFEL group, emphasizes: "Our cascading scheme will greatly lower the demand on the required laser system for electron acceleration in the non-relativistic regime, opening new possibilities for the design of terahertz-based accelerators."

The work is funded by the EU Synergy Grant AXSIS (frontiers in Attosecond X-ray Science: Imaging and Spectroscopy) at CFEL. CFEL is a joint venture of DESY, the University of Hamburg and the Max Planck Society.

DESY is one of the world's leading particle accelerator centers and investigates the structure and function of matter - from the interaction of tiny elementary particles and the behavior of novel nanomaterials and vital biomolecules to the great mysteries of the universe. The particle accelerators and detectors that DESY develops and builds at its locations in Hamburg and Zeuthen are unique research tools. They generate the most intense X-ray radiation in the world, accelerate particles to record energies and open up new windows onto the universe. DESY is a member of the Helmholtz Association, Germany's largest scientific association, and receives its funding from the German Federal Ministry of Education and Research (BMBF) (90%) and the German federal states of Hamburg and Brandenburg (10%).