But the state has already denied one permit for the Jordan Cove project. 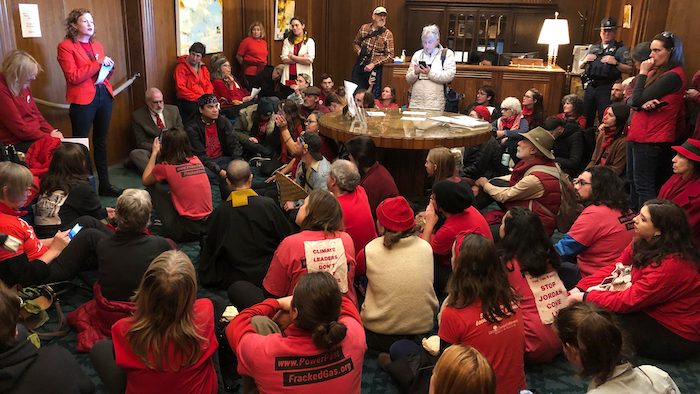 SALEM, Ore. (AP) — A U.S. regulatory agency on Thursday approved a controversial natural gas pipeline and marine export terminal project in Oregon, but the state's Democratic governor threatened to go to court to stop the project if it doesn't obtain every permit required from state and local agencies.

The Jordan Cove project, which would create the first LNG export terminal on the West Coast in the lower 48 states, has already been denied one state permit.

“Currently, this project does not have a green light from state agencies,” Gov. Kate Brown said. “I have asked the state’s lawyers to consider all appropriate legal action to assure that Oregon permitting processes will be followed.”

The Federal Energy Regulatory Commission in Washington voted 2-1 in favor of the terminal. Commission Chairman Neil Chatterjee said it is now up to Pembina, the Canadian energy company behind the Jordan Cove project, to obtain all the necessary permits "before construction begins."

The company said it is pleased with the commission's decision but did not comment on how it plans to secure Oregon state permits.

"The approval emphasizes yet again that Jordan Cove is environmentally responsible and is a project that should be permitted given a prudent regulatory and legal process was undertaken," said Harry Andersen, Pembina's senior vice president and chief legal officer.

The Oregon Department of Environmental Quality has already denied a water quality certification for the project. Last month, Oregon Department of State Lands Director Vicki Walker refused to grant another extension to Pembina to file documents in its application for a permit to dredge sediment out of Coos Bay and to construct the Pacific Connector Gas Pipeline. Pembina reacted by withdrawing its application for the state permit.

Chatterjee said Jordan Cove is the first export terminal the commission has certificated on the West Coast in the lower 48 states and it would be capable of liquefying up to 1.04 billion cubic feet of natural gas a day for export to global markets.

Kathleen Sgamma, president of Western Energy Alliance, which represents several oil and natural gas companies in Western states that would produce some of the natural gas, applauded the decision and said the project will generate jobs in Oregon, Colorado, Wyoming and Utah.

The dissenting commissioner, Richard Glick, said the decision violates the requirements of the Natural Gas Act and the National Environmental Policy Act, fails to consider the impact greenhouse gas emissions will have on climate change and would significantly impact 20 threatened and endangered species.

Commissioner Bernard McNamee, who voted in favor of the project, said that while the commission considers local and state interests, it ultimately is required to consider the national interest in making a decision.

The marine export terminal would be located at Coos Bay, with a 230-mile (370-kilometer) feeder pipeline crossing southern Oregon.

Klamath Tribes, a federally recognized group of three Native American tribes, said it is disappointed in the commission's approval of a project “that would harm the cultural and natural resources that are vital to our people.”

“We will consider our options to protect those resources and we hope that the state of Oregon will stand with us,” tribes Chairman Don Gentry said.

The Trump administration supports energy export projects and in particular Jordan Cove. It has proposed streamlining approval of gas pipelines and other energy projects by limiting states’ certification authorities under the U.S. Clean Water Act.

State Sen. Jeff Golden, a Democrat, recently told demonstrators opposed to Jordan Cove that he expects the battle to go to the courts if the Trump administration tries to ram the project through despite a lack of state permits.

Opponents of the project have demonstrated against it and on Nov. 21 occupied the governor's office until they were removed by state police.