Calif. Gov. Gavin Newsom dropped his opposition to the plan. 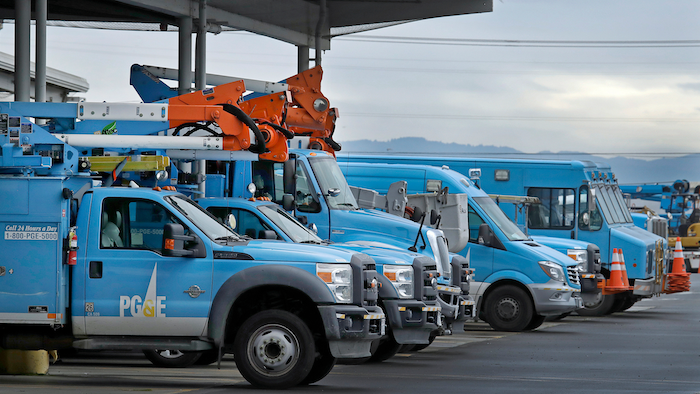 BERKELEY, Calif. (AP) — Pacific Gas & Electric on Monday won court approval to raise $23 billion to help pay its bills over destructive California wildfires after Gov. Gavin Newsom dropped his opposition to a financing package designed to help the nation's largest utility get out of bankruptcy.

The milestone reached during an unusual court hearing held by phone moves PG&E closer to its goal of emerging from one of the most complex bankruptcy cases in U.S. history by June 30.

Newsom has said he fears P&E is taking on too much debt to be able to afford an estimated $40 billion in equipment upgrades needed to reduce the chances of its electricity grid igniting destructive wildfires in the future.

The utility's outdated system triggered a series of catastrophic wildfires in 2017 and 2018 that killed so many people and burned so many homes and businesses that the company had to file for bankruptcy early last year.

But the recent volatility in the financial markets caused by the coronavirus pandemic apparently softened Newsom's stance after PG&E lined up commitments from investors promising to buy up to $12 billion in company stock.

Those guarantees are looming larger, given the turmoil that has caused the benchmark Standard & Poor's 500 index to plunge by roughly 25% during the past three weeks. Because of the company's already shaky condition, PG&E's stock has been hit even harder, with shares losing nearly half their value during the same stretch. The stock fell 12% Monday to close at $8.95, its lowest price since early December.

Given the potential for upheaval in the financial markets to persist, PG&E lawyer Paul Zumbro told U.S. Bankruptcy Judge Dennis Montali that the commitments are “critically important.” A representative for Newsom said the governor agreed.

“People often talk tough when there is a level playing field, but in circumstances, almost all people want to make deal," said Eric Snyder, a bankruptcy lawyer who has been following PG&E's case.

Newsom has unusual leverage over PG&E because the company also needs state approval of its bankruptcy plan to qualify for coverage from a wildfire insurance fund that California created last summer.

In a statement, PG&E said it's making “good progress" in discussions with Newsom. The governor's office didn't immediately respond to requests for comment about Newsom's change of heart on PG&E's financing package or other aspects of his talks with the company.

Among other demands that still haven't been addressed, Newsom wants PG&E to replace its entire 14-member of board of directors to help ensure the utility is better managed. The company so far has promised to reshuffle its board but has resisted sweeping out all the directors, including CEO Bill Johnson.

Newsom has intensified his focus on the coronavirus during the past two weeks as the disease's outbreak worsened in California, but that doesn't mean the Democratic governor isn't keeping a close watch on PG&E, said Jared Ellias, a UC Hastings College of the Law professor who has been tracking the case.

“The long-term health of PG&E has to remain a top priority because God forbid if this coronavirus remains a problem heading into wildfire season this summer,” Ellias said.

Besides issuing more stock to raise money, PG&E and its parent company will take on as much as $11 billion in additional debt while refinancing billions in existing loans.

PG&E primarily needs the cash to pay off $25.5 billion in claims as part of settlements reached with wildfire victims, insurers and government agencies. That's a fraction of the more than $50 billion in losses that wildfire victims and insurers had estimated PG&E owed them in the early stages of the bankruptcy case.

Reflecting the complexity of the situation, Montali conceded that the nuances of PG&E's financing package are “beyond my understanding" and put his faith in the parties who put it together that it's now the best option available.

The unusual admission came during an extraordinary hearing that had to be held by phone because Montali's courthouse was closed to try to help limit the spread of the coronavirus.