Even if oil is found, it would likely be years before the country would reap any benefits. 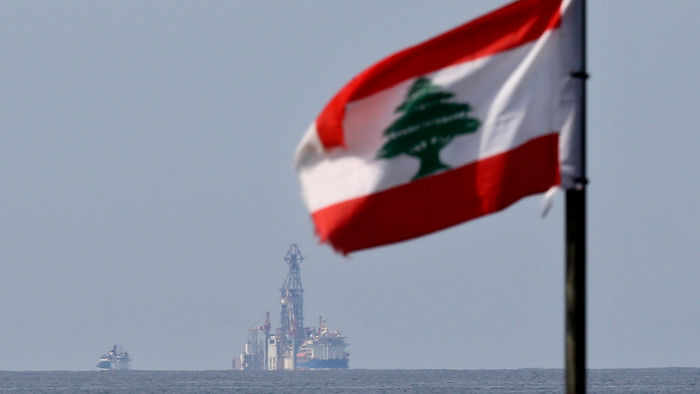 A Lebanese flag in the wind as the drilling ship Tungsten Explorer is seen off the coast of Beirut, Feb. 27, 2020.
AP Photo/Hussein Malla

Michel Aoun spoke aboard the drill ship Tungsten Explorer, which will be conducting the drilling operations of the first exploration well, located approximately 30 kilometers (18 miles) offshore from the capital Beirut.

“Today is a happy day for us and for all Lebanese, and we hope the dream we've all imagined is realized today. It is a historic day," he said.

The ceremony at sea contrasted sharply with Lebanon's crippling financial and economic crisis, including a deepening liquidity crunch and soaring public debt. The limits have prompted protests against the financial institutions — including violent attacks on ATM machines and some bank branches.

Lebanon has one of the highest debt to GDP ratios in the world, standing at about $87 billion or more than 150% of the country’s GDP. Teetering on economic and financial collapse, the Lebanese government is now considering whether to pay or default on its $1.2 billion Eurobond debt, which matures next month.

Lebanon has never defaulted on its debt payments. Defaulting could be costly to the national economy and banking system, which until the recent financial crisis was considered one of Lebanon’s most profitable and reputable sectors.

Experts say it would be years before the country could start extracting and reaping the benefits of any oil found in its waters, should any be found.

On the ship, Prime Minister Hassan Diab said the exploratory drilling "offered a ray of light amid the darkness" and hoped it was the beginning of a transformation that would see Lebanon become an oil country.

The media office of Lebanon's Energy Minister said the excavation work will start in a few days, after receiving drilling equipment and supplies from the logistics base at Beirut port.

In 2017, Lebanon approved the licenses for an international consortium led by France's Total, Italy’s ENI and Russia’s Novatek to move forward with offshore oil and gas development for two of 10 blocks in the Mediterranean Sea, including one that is partly claimed by Israel.

Total said the first well will be drilled at a depth of 1,500 meters (4,920 feet). The exploration well aims at exploring targets located more than 2,500 meters (8,200 feet) below the sea bed. The drilling of the well is estimated to last two months, after which the drill ship will leave Lebanon, Total said.

At a later stage that hasn’t yet been scheduled, drilling should begin in Block 9, part of which Israel also claims. A major find in Lebanon’s southernmost waters could raise the possibility of a dispute with Israel.

The U.S. has been mediating between Lebanon and Israel over the nearly 860 square kilometers (330 square miles) of the Mediterranean Sea claimed by both countries.