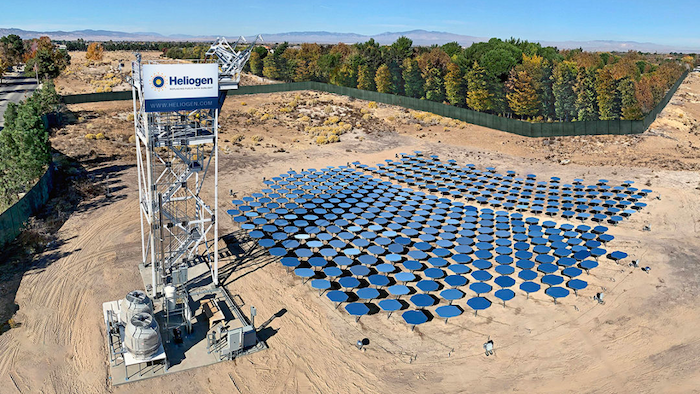 A Southern California solar technology startup says it is now able to convert sunlight into the extremely high temperatures needed for a variety of industrial processes.

Heliogen, which aims to replace fossil fuels with fuel and energy generated by the sun, announced Tuesday that its facility in Lancaster, Calif., successfully concentrated solar energy to reach more than 1,000 degrees Celsius, or 1,832 degrees Fahrenheit. Those temperatures, officials said, provide sufficient heat to to produce cement, steel and petrochemicals — and, as a result, replace the fossil fuels currently used in those industries.

“With low-cost, ultra-high temperature process heat, we have an opportunity to make meaningful contributions to solving the climate crisis,” CEO and founder Bill Gross said in a statement.

The company, based in Pasadena, uses an array of computer-controlled mirrors to focus sunlight toward a receiver atop a tower.

Heliogen officials said the achievement nearly doubles the heat generated by earlier solar thermal systems. The company eventually hopes to reach temperatures of up to 1,500 degrees Celsius, which would enable production of carbon-free hydrogen or syngas for fuel.

The company is, in part, backed by billionaires Bill Gates and Patrick Soon-Shiong and venture fund leaders Kittu Kolluri and Steve Case.

Gates noted in the announcement that the industrial processes targeted by the high-temperature technology currently account for more than one-fifth of the world’s carbon emissions; the company said concrete alone generates 7%.

“These materials are everywhere in our lives but we don’t have any proven breakthroughs that will give us affordable, zero-carbon versions of them,” Gates said. “If we’re going to get to zero-carbon emissions overall, we have a lot of inventing to do.”