PG&E insisted on the shut-offs for public safety, but infuriated residents and public officials. 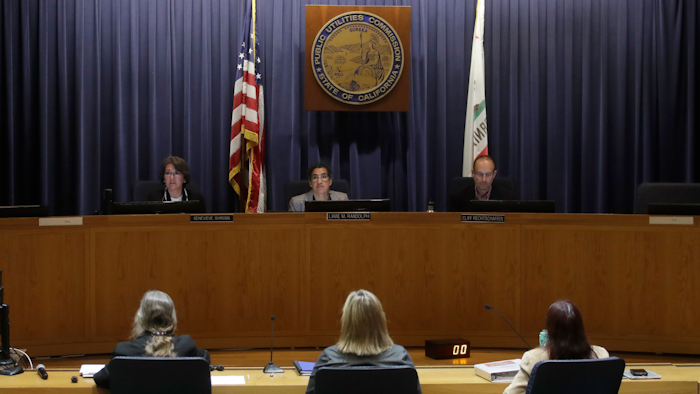 SAN FRANCISCO (AP) — California regulators opened a formal investigation Wednesday into preemptive power outages that blacked out large parts of the state in October, drawing strong rebukes from public officials and residents who said the shut-offs were too broad and poorly executed.

The unanimous vote by the California Public Utilities Commission followed testimony from a handful of people who pleaded with the panel for leadership at a time of increased danger from fire and other natural disasters.

“Many Californians are debating whether California is still safe. Is this a safe place to live?” said Will Abrams of Santa Rosa, whose house burned down in 2017 in wildfires that roared through Northern California wine country.

The state’s largest utility, Pacific Gas & Electric Co., initiated multiple rounds of shut-offs and plunged nearly 2.5 million people into darkness at one point throughout central and Northern California. Some of the outages lasted for several days.

PG&E officials insisted on the shut-offs for public safety, but infuriated residents and a parade of public officials, including Gov. Gavin Newsom, who said cutting off power should be a last resort and that the company regularly botched communications.

Nevada City Mayor Reinette Senum said Wednesday that her rural community had no working phones or internet. She wants local control over the power grid, which she said could take better care than PG&E, which is a for-profit utility.

“Basically, we were sent back into the dark ages,” she said.

The outages raised concerns about whether the utilities “properly balanced the need to provide reliable service with public safety,” said the order authorizing the investigation.

Commission President Marybel Batjer requested the broad investigation, saying that widespread outages “cannot be the new normal for California.” Commissioners said Wednesday that they want to know what can be done to improve shut-offs or reduce their scope in the future.

Batjer also signed an order Tuesday directing PG&E to show why it should not be fined for other violations related to the shutdowns. Each violation of state requirements involving power shutdowns could carry a $100,000 penalty.

Bill Johnson, the chief executive of PG&E, has said the outages kept people safe, although a transmission line in Sonoma County that was not powered off malfunctioned minutes before a wildfire erupted Oct. 23, forcing about 180,000 people to evacuate.

Utility spokeswoman Ari Vanrenen said again Wednesday that the shut-offs were the right call. He said the company continues to improve and has “made every effort” to implement the commission’s requirements when it cuts power.

Abrams not only lost his home in the 2017 wildfires, but his children had to endure smoke from a deadly 2018 wildfire in Paradise. Last month, the family evacuated from another Sonoma County wildfire. They were terrified to cross into the San Francisco Bay Area amid smaller grassland fires sparked by PG&E lines falling during high, hot winds, he said.

“The wonderful thing about regulators is you can cut through the rhetoric,” he said.

Commissioners have been stewing over the outages.

Last month, they grilled PG&E officials at an emergency meeting called by Batjer, demanding answers for why the utility was so unprepared for an Oct. 9 shutdown in which counties and customers struggled with a crashing website and overworked call lines to get information.

When many cellphone towers were down and internet services out, the utility told people to get information from a website, through relatives or by calling on a landline.

The outages were astonishing for a state that is one of the world’s economic powerhouses. People made frantic dashes for cash and gas as businesses watched their goods spoil. Some elderly and disabled people were trapped in their apartments with elevators out of service.

PG&E initiated five rounds or shut-offs, with the smallest affecting about 30,000 people and the largest affecting nearly 2.5 million. Residents in San Francisco suburbs and in Northern California wine country were without power for days.

The company is in bankruptcy and faces $30 billion in liabilities after its equipment was found to have started several deadly wildfires in 2017 and 2018, including the Camp Fire that killed 85 in Butte County.

In September, PG&E reached an $11 billion settlement with most of the insurers covering victims of deadly wildfires, but Newsom is stepping up pressure on PG&E to fork over billions more.

If PG&E doesn't make changes, Newsom is threatening to try to turn the utility into a customer-owned cooperative run by the state and local governments. The company so far has defended its proposal as a fair deal for all parties involved in its bankruptcy.