The line will stay shut down until its Canadian owner works to determine the cause of a breach in North Dakota. 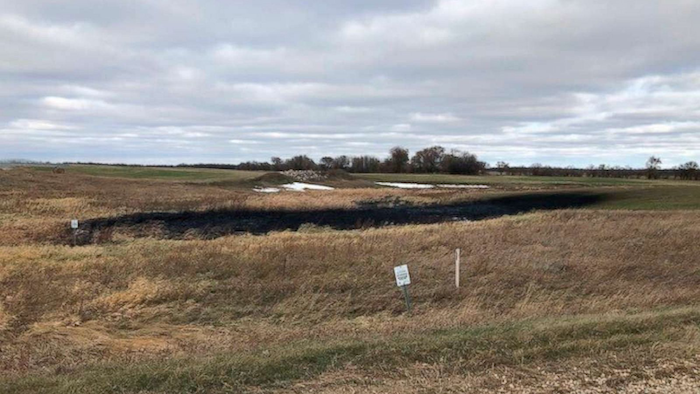 BISMARCK, N.D. (AP) — Federal regulators have ordered the Keystone pipeline to remain shut down until its Canadian owner takes corrective action aimed at determining the cause of a breach that leaked an estimated 383,000 gallons (1.4 million liters) of oil in northeastern North Dakota.

The Pipeline and Hazardous Materials Safety Administration issued the order Tuesday to Calgary, Alberta-based TC Energy. The action comes one week after the pipeline leak was discovered and affected about 22,500 square feet (2,090 square meters) of land near Edinburg, in Walsh County.

The pipeline has been shut down since Oct. 29. It is designed to carry crude oil across Saskatchewan and Manitoba, and through North Dakota, South Dakota, Nebraska, Kansas and Missouri on the way to refineries in Patoka, Illinois, and Cushing, Oklahoma.

The order requires the company to send the affected portion of the 30-inch (76-centimeter) steel pipeline to an independent laboratory for testing. The company also must develop a plan to restart the line and for remediation.

TC Energy, formerly known as TransCanada, said in a statement it expects to have the damaged portion of the pipeline excavated by the end of the week.

The company said it has about 200 people at the site working around the clock who are "focused on clean-up and remediation activities."

"We're continuing to monitor air quality around the site and the surrounding area throughout clean-up, with no concerns," TC Energy said.

Rockeman said some wetlands were affected, but not any sources of drinking water.

The pipeline spill and shutdown come as the company seeks to build the $8 billion Keystone XL pipeline that would carry tar sands oil from Alberta, Canada, to refineries in Texas. The proposed Keystone XL pipeline has drawn opposition from people who fear it will cause environmental damage.