Government investigators said the Houston-area complex was not equipped with a system to warn of releases from its tanks. 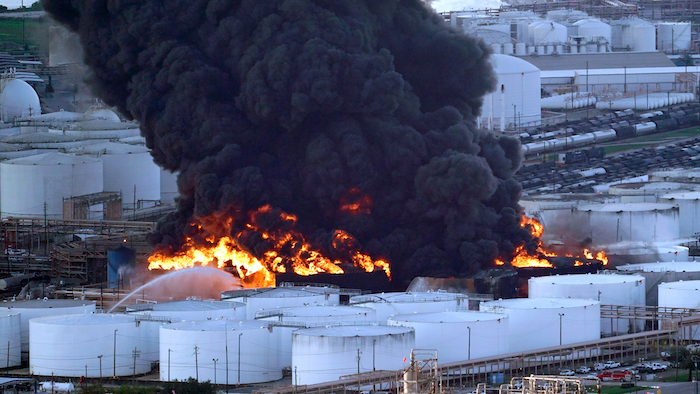 HOUSTON (AP) — A company that owns a Houston-area petrochemical storage facility which burned for days in March didn't have an alert system in place to warn of releases from its tanks, a federal agency investigating the blaze said Wednesday.

The fire, which began March 17 in Deer Park, about 20 miles (32 kilometers) southeast of Houston, sent waves of thick, black smoke thousands of feet into the air and forced the closure of roads, schools and a critical shipping channel. It caused no injuries but triggered air quality warnings.

In a report updating its ongoing probe, the U.S. Chemical Safety and Hazard Investigation Board said the fire originated at one storage tank that mostly contained naphtha, a flammable liquid typically used as feed stock in gasoline production.

The facility, owned by Intercontinental Terminals Company, was made up of large storage tanks that contained components of gasoline and materials used in nail polish remover, glues and paint thinner.

The night before the fire, two trucks transferred butane, a flammable gas, into the storage tank to mix it with the naphtha. The combined product was set to be transferred to a ship the following day.

But on March 17, a mechanical problem likely developed around 7:25 a.m. in the storage tank's pump that mixes the naphtha and butane, according to the report.

The tank began to release the naphtha product, but employees didn't know it was coming out and no alarms were activated because the "tank farm was not equipped with a fixed gas detection system," the report said.

"As a result, ITC personnel were unaware of the naphtha product release before the fire erupted" at around 10 a.m., according to the report. The fire, which spread to other nearby tanks, burned until March 20.

The safety board also said ITC didn't equip the storage tank with emergency shut off valves that could remotely stop an uncontrolled release. Instead such valves had to be operated from the tank.

"Under a major fire scenario resulting from a leak near this equipment, neither ITC operators nor emergency responders could access the area to close these manually operated valves," the report said.

The safety board said it's still conducting its investigation, including determining what ignited the fire.

Crystal Thomas, the lead investigator, told the board during a meeting Wednesday in Washington, D.C., that the final report likely won't be done until a year after the fire.

The Harris County District Attorney's Office filed water pollution charges in April against ITC, alleging the fire caused chemicals to flow into a nearby waterway. The case is still pending.

The charges stem from the failure of a dike adjacent to the tank farm, which allowed flammable chemicals to seep into nearby bayous and then into the Houston Ship Channel, which partially closed during the cleanup efforts. The channel is a critical commercial waterway that connects oil refineries in the Houston area between the Port of Houston and the Gulf of Mexico.

At times during the blaze, monitors detected elevated levels of benzene in the air, prompting officials to order nearby residents to remain indoors.

Board member Rick Engler said he hopes that part of the investigation includes reviewing the efforts that were made to accurately monitor for benzene and other toxic emissions during the fire.