Experts say it's hard to know what might have happened had the power stayed on amid a mild fire season in California. 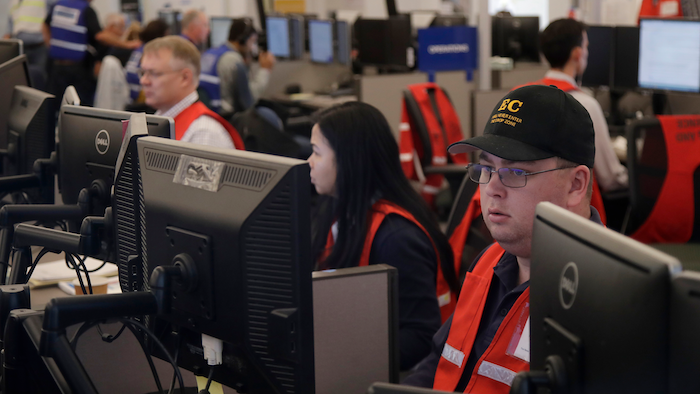 SAN FRANCISCO (AP) — Millions of Californians spent part of the week in the dark in an unprecedented effort by the state's large electrical utilities to prevent another devastating wildfire. It was the fifth time Pacific Gas & Electric Co. has preemptively cut the power but by far the largest to date in the utility's effort to prevent a deadly wildfire sparked by its power lines.

But do the power shut-offs actually prevent fires?

Experts say it's hard to know what might have happened had the power stayed on, or if the utility's proactive shutoffs are to thank for California's mild fire season this year.

"It's like trying to prove a negative," said Alan Scheller-Wolf, professor of operations management and an energy expert at Carnegie Mellon's Tepper School of Business. "They can't prove they prevented a disaster because there's no alternative universe where they didn't try this."

The winds that prompted the mass outage that affected about 2 million people in northern and central parts of the state shifted southward by Thursday, where a wind-driven wildfire led officials to order the evacuation of 100,000 people from their homes in foothills of the San Fernando Valley.

California is experiencing the first major fire activity of the season after two years that brought some of the most devastating fires on record, many of them caused by utility equipment. Until Monday, fires had covered only about 5% of the acreage burned by that date last year, and only about 13% of the average for the last five years.

But it's too early — and maybe impossible — to tell if that can be attributed to increased measures to cut power.

"We have good reason to be skeptical, and the reason is that PG&E bears the costs of starting a fire, but they don't bear the costs of shutting off power," said Severin Borenstein, faculty director of the Energy Institute at University of California, Berkeley's Haas School of Business.

He noted that weather forecasting is notoriously difficult, "so even if PG&E were doing the best possible job, it would not get it right sometimes."

Marybel Batjer, president of the California Public Utilities Commission, which regulates PG&E, blasted the company Monday for "failures in execution" during the outage. She ordered a series of corrective actions, such as setting a goal of restoring power within 12 hours instead of its current 48 hours, minimizing the scale of outages and improving communication.

PG&E said in a statement Monday that employees found more than 100 spots where parts of its systems were damaged during the strong winds, including downed power lines and places where trees had hit the lines. Repairs were either completed or underway at those sites.

Gov. Gavin Newsom blasted PG&E for what he called decades of mismanagement, underinvestment and lousy communication with the public. In a letter sent Monday to Bill Johnson, PG&E's president and CEO, Newsom urged the utility to compensate affected customers with a bill credit or rebate worth $100 for residential customers or $250 for small businesses.

Newsom said the shutoffs affected too many customers for too long, and it's clear PG&E implemented them "with astounding neglect and lack of preparation."

Johnson responded with a statement that didn't address Newsom's request for customers to be compensated, but which said the power was cut to keep customers safe, and "that was the right decision."

In a sharp rebuke of PG&E delivered in the midst of the shutoff last week, Newsom pointed to San Diego Gas & Electric, which pioneered proactive power shutoffs following a devastating 2007 fire sparked by its equipment, as a model for responsibly shutting off power in bad weather.

"Specifically as it relates to their predictive analysis, their weather station, I had a chance to visit it a few months ago," Newsom said. "It's exceptional. It's at another level."

It replaced about 18,000 wooden poles with steel, installed new conductors and increased the wind tolerance in remote areas, using data from weather sensors to know which equipment was most at risk. The company also sectionalized electrical circuits so power managers could target outages more precisely to the lines facing danger.

"We didn't have all the answers then, but what we did know was we had to change and we had to do things differently," Winn said.

A decade of data and the refined grid have helped SDG&E to narrowly target outages when they're necessary, she said. Of its 14 outages since 2013, only two affected more than 20,000 customers and most have been significantly fewer.

Outside California, other large Western utilities in Nevada and Utah said they, too, are considering proactively shutting off power to avoid sparking fires.

"We want to make sure our system isn't the cause of one of these devastating fires," said Tiffany Erickson, a spokeswoman for Rocky Mountain Power in Utah, which has notified 5,000 households and businesses that shutoffs are possible during dangerous weather.

Last month, Southern California Edison shut off electricity to 14,000 customers in the remote Mammoth Lakes area along the eastern side of the Sierra Nevada because of forecasts of extreme winds and extremely dry vegetation.

Winds reached 88 mph (141 kph), and the California Highway Patrol banned trucks and campers from traveling along a highway after gusts blew over big rigs, the utility said. The winds toppled power poles and damaged electric circuits.

"It's abundantly clear that the conditions that were in place up there were so severe that they could likely have caused a spark to occur," said Don Daigler, a company spokesman. "We're not going to do this willy-nilly."

"Think about the railroads then," Pyne said. "They were enormously powerful — economically, politically, socially. And we took it on. Railroads ceased to be a source of regular or lethal emissions (of sparks)."