Drilling in the northern Groningen province has caused earthquakes that badly damaged thousands of homes in recent years. 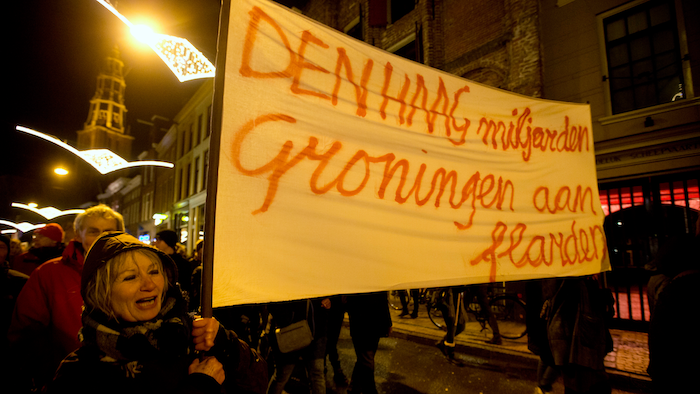 In this Jan. 19, 2018, file photo, a protester holds a banner reading "The Hague Billions, Groningen To Shreds" as thousands of people protest against gas extraction and related earthquakes.
AP Photo/Peter Dejong, File

THE HAGUE, Netherlands (AP) — The Dutch government announced Tuesday that it expects to stop extracting gas from a vast underground field in the country's north by mid-2022, ending decades of lucrative drilling.

The government has been under pressure to halt gas extraction in Groningen province because it has caused a series of earthquakes that have badly damaged thousands of homes in the region in recent years.

Last year, the government said it planned to fully stop drilling by 2030.

Economic Affairs and Climate Minister Eric Wiebes informed Dutch lawmakers of the likely end of drilling in the Groningen gas field in a letter to parliament.

"Phasing out gas extraction is the way to tackle the earthquake problems at the source," Wiebes said. "Groningen will become safer because of this accelerated phasing out."

He said that if 2022 proves to be an unusually cold year then a small amount of gas may still be extracted.

Wiebes says that extraction will be cut to 11.8 billion cubic meters next year, which will cost the government 400 million euros ($440 million) in lost income.

Energy giants Shell and Esso — now ExxonMobil — set up a joint venture to explore for gas shortly after World War II. In 1959, it discovered the Groningen gas field, one of the world's largest, with 2,800 billion cubic meters (98,870 billion cubic feet) of reserves.

Groninger Gasberaad, an umbrella group of organizations with concerns about gas extraction in the region, welcomed the news, but said in a tweet: "Will we also get a guarantee that all people in Groningen will be fully compensated in 2022 and will be able to live without damage, safely and with secure house prices."