The Standing Rock Sioux Tribe wants a say in a project that would double the capacity of the Dakota Access pipeline. 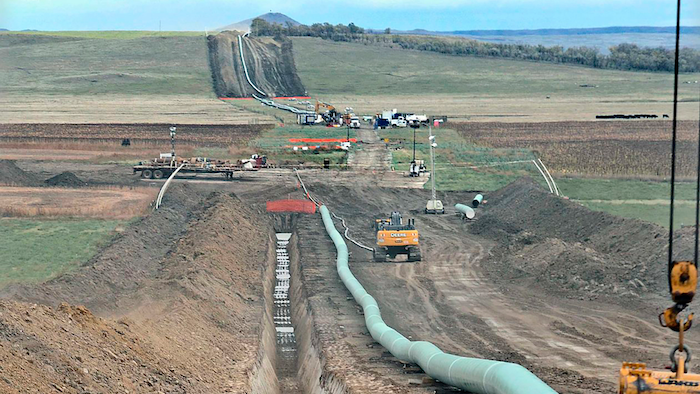 BISMARCK, N.D. (AP) — The Standing Rock Sioux Tribe filed a motion Wednesday to intervene on a proposed expansion of the Dakota Access pipeline that would double the line's capacity.

The tribe, which led original opposition to the crude oil pipeline, petitioned for status as an intervenor in the case before the Public Service Commission arguing its "interests ... are not adequately represented."

North Dakota regulators have set a Nov. 13 public hearing on the proposed expansion. The public hearing, which was requested by the tribe and the Sierra Club, will be held in the south-central city of Linton, near where a pump station would go in to increase the line's capacity.

Texas-based Energy Transfer announced in June it plans to expand the pipeline's capacity from more than 500,000 barrels per day to as much as 1.1 million barrels. The pipeline has been moving North Dakota oil through South Dakota and Iowa to a shipping point in Illinois since June 2017.

Standing Rock attorney Timothy Purdon said if it's granted intervenor status, the tribe would be allowed to cross-examine the company and call witnesses.

The $3.8 billion pipeline is less than a half-mile from the Standing Rock Reservation, beneath a Missouri River reservoir that is the tribe's water source.

Fears of an oil spill into the river sparked massive protests in 2016 and 2017, drawing thousands of pipeline opponents to North Dakota.

The company said the expansion would help meet the growing demand for oil from North Dakota, the nation's second-biggest oil producer behind Texas.

Energy Transfer is proposing additional pumping stations in the Dakotas and Illinois. The company needs permission from the North Dakota Public Service Commission for the expansion because some of the land needed is outside of the pipeline's path.