The Friday evening blast shattered windows two miles away and knocked off doors inside buildings. 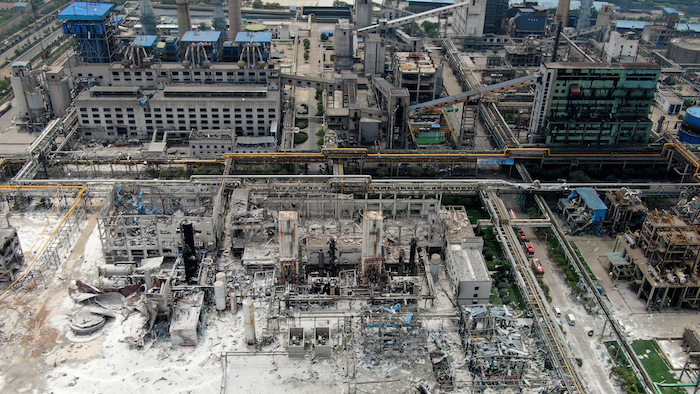 An aerial view shows the aftermath of the blast at a gas plant in Yima city in central China's Henan province Saturday, July 20, 2019.
Chinatopix via AP

BEIJING (AP) — Authorities in central China said Sunday the death toll in a gas plant explosion has risen to 15 with another 15 seriously injured.

Three people who were previously missing have been found dead, said local authorities. About 270 firefighters and rescue workers have completed three rounds of search and rescue since the Friday evening explosion in Yima city in Henan province, China's Ministry of Emergency Management said.

The official Xinhua news agency says the explosion occurred in the air separation unit of the Yima gas factory of the Henan Coal Gas (Group) Co., Ltd. It said that all production had stopped.

China experiences frequent industrial accidents despite orders from the central government to improve safety at factories, power plants and mines.

More than 60 people died in March in a chemical plant explosion in eastern Jiangsu province.

Among the worst accidents was a massive 2015 explosion at a chemical warehouse in the port city of Tianjin that killed 173 people, most of them firefighters and police officers. That blast was blamed on illegal construction and unsafe storage of volatile materials.