An easier method of water catalysis could help boost a promising zero-emission technology. 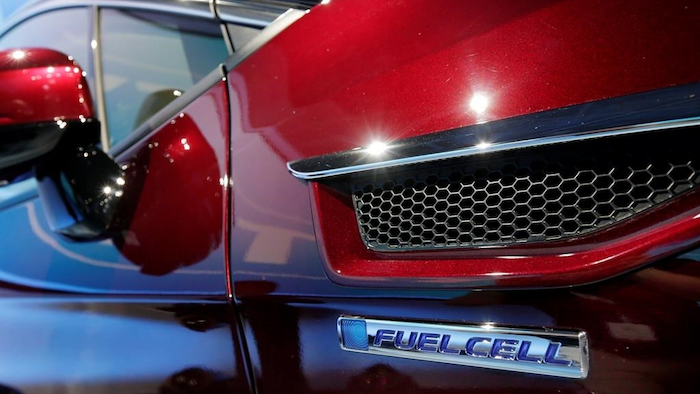 The fuel cell logo adorns the fender of a Honda Clarity at a media preview at the New York International Auto Show on Wednesday, April 12, 2017.
AP Photo, File

A discovery by researchers at the University of Arkansas could help address a major obstacle to the development of hydrogen fuel cell technologies.

Arkansas chemists and engineers, along with scientists from the Brookhaven and Argonne national laboratories, uncovered a more cost-effective and efficient way to produce hydrogen fuel using small particles of nickel and iron.

The study, published in the journal Nanoscale, detailed how nanocatalysts — comprised of a nickel core and iron and nickel shell — weakened the bonds between hydrogen and oxygen atoms in water. The technique allows hydrogen to be generated more easily — and efficiently — through water catalysis, all while using common, less expensive metals than the catalysts currently used in the process.

Unlike battery-powered electric cars — which account for the vast majority of zero-emission cars on U.S. roads — hydrogen fuel cell vehicles can be fueled quickly and travel longer distances just like conventional gasoline-powered vehicles, but produce only water vapor as a byproduct.

Automakers and policymakers in Japan and Korea, in particular, embraced the technology, but the systems largely struggled to break through elsewhere amid minimal refueling infrastructure, and critics argue that producing hydrogen fuel consumes too much energy compared to battery vehicles.