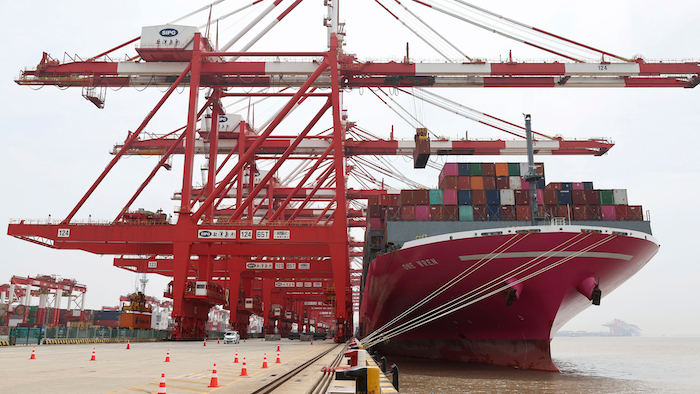 In this photo released by Xinhua News Agency, a container ship from Japan is anchored at the container dock of Shanghai's Yangshan Port in east China on April 27, 2022. China's export growth tumbled in April after Shanghai and other industrial cities were shut down to fight virus outbreaks.
Chen Jianli/Xinhua via AP

BEIJING (AP) — China’s export growth tumbled in April as global demand weakened, adding to pressure on the world’s second-largest economy after Shanghai and other industrial cities were shut down to fight virus outbreaks.

Exports rose 3.7% over a year earlier to $273.6 billion, down sharply from March’s 15.7% growth, customs data showed Monday. Reflecting weak Chinese demand, imports crept up 0.7% to $222.5 billion, in line with the previous month’s growth below 1%.

Demand for Chinese exports is under pressure from high inflation and interest rate hikes in the United States and other major markets and consumer uncertainty about the economic outlook and job prospects.

Companies and investors worry the ruling Communist Party’s “zero-COVID” strategy that temporarily closed most businesses in Shanghai and other industrial centers will disrupt global trade and activity in autos, electronics and other industries.

“Virus disruptions continued to take a toll but the main headwind to exports is weakening foreign demand,” said Julian Evans-Pritchard of Capital Economics in a report. “We expect export volumes to fall further over the coming quarters.”

Exports to the United States rose 9.5% to $46 billion despite lingering tariff hikes in a fight over Beijing’s technology ambitions. Imports of American goods advanced 0.9% to $13.8 billion.

China’s global trade surplus widened by 19.4% to $51.1 billion while the politically volatile surplus with the United States contracted by 65% to $9.8 billion.

China’s case numbers in its latest outbreaks are relatively low, but Beijing’s insistence on isolating every infected person kept most of Shanghai’s 25 million people confined to their homes. Access to Guangzhou, a manufacturing and trading center in the south, and industrial center Changchun in the northeast were suspended.

Authorities have eased controls on Shanghai and allowed millions of people out of their homes, but restrictions have tightened in Beijing and some other cities.

Managers of the Port of Shanghai, the world’s busiest, say it is functioning normally, but figures they cite for daily cargo volume it handles are down 30% from normal. Shippers say they are avoiding the port out of concern there aren’t enough truck drivers available to carry their goods.

Auto factories and other manufacturers that tried to keep operating by having staff live at their facilities were forced to reduce or stop production because supplies of components were disrupted.

China’s economy grew by a weak 4.8% over a year earlier in the quarter ending in March, up from 4% from the final three months of 2021. Economists warned, however, there would be more downward pressure on activity in the April-June quarter due to anti-virus controls.

Consumer demand for imports has been depressed by an official campaign to cut debt in China's vast real estate industry, which supports millions of jobs. That triggered an economic slowdown in the second half of 2021.

Imports from Russia, a major gas supplier, jumped 56.6% over a year earlier to $8.9 billion, possibly reflecting the surge in global energy prices due to jitters over supply disruptions caused by Moscow’s war on Ukraine.

Beijing has criticized trade and financial sanctions imposed on Moscow by the United States, Europe and Japan. But Chinese companies appear to be abiding by them while trying to guard against possible losses in dealings with Russia.