The Consumer Financial Protection Bureau is staffing up in anticipation of taking a more active role in regulation and enforcement. 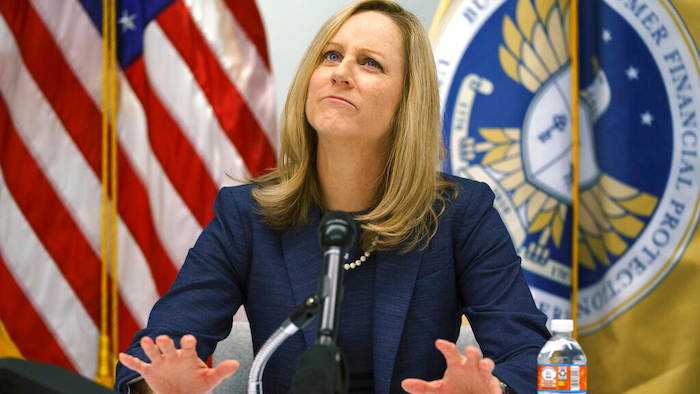 NEW YORK (AP) — The nation's consumer watchdog is signaling a more aggressive approach toward the financial services sectors after a few years of being on a tight leash.

Under President Biden, the Consumer Financial Protection Bureau has rescinded or scaled back a number of policies put in place by the Trump administration. And the bureau is staffing up in anticipation of taking a more active role in regulation and enforcement, as it did during the Obama administration.

This is all being done without the CFPB having a permanent director, an important position since the bureau’s authority comes from the director who is answerable only to the president. Dave Uejio, a long-time career employee of the bureau, has been the bureau’s acting director since Trump’s appointee Kathy Kraninger resigned the day Biden was sworn into office.

Despite holding a caregiver or placeholder position, Uejio’s has been quite active in the role.

In April, the bureau broadened the scope for what it considers to be abusive behavior by providers of financial services or products to consumers. Under Kraninger, the bureau adopted a narrower definition that, among other things, made monetary penalties less likely. The change will likely result in more enforcement actions and larger fines against the financial services industry, experts said.

Created in 2011, the CFPB was supposed to be a nonpartisan advocate for consumers and borrowers after the Great Recession; instead, the bureau has often been caught in the middle of the ideological war between Democrats and Republicans’ views on how to run government.

Under the Trump administration, enforcement actions and fines dropped off significantly compared to when the bureau was controlled by Richard Cordray, President Obama’s appointee to the bureau who left in November 2017. The bureau's own data shows the CFPB collecting roughly $650 million in fines or penalties per year under Trump appointees' control compared to $1.84 billion on average collected annually under the Obama administration.

The bureau also rescinded several measures put into place by the Trump administration during the early days of the coronavirus pandemic. Many of these directives were designed to give banks flexibility — particularly when it came to record-keeping as the entire industry shifted to working remotely. But consumer advocates argue that the banking industry has had a full year to adjust at this point, and consumers deserve accurate records no matter what.

“He’s off to a promising start, setting the tone and direction for the CFPB that we hope the permanent director will adopt,” Odette Williamson, an attorney at the National Consumer Law Center, said of Uejio.

The bureau has also extended its mission in ways previously not seen.

Using its authority to go after debt collectors, the CFPB moved last month to protect tenants behind on rent due to the pandemic from eviction. The Centers for Disease Control last year put into effect an eviction moratorium, but the CDC had no statutory authority itself to enforce its own rule. So, the bureau used its authority to force any agents acting on behalf of landlords, typically law firms hired to collect back rent, to give tenants their rights under the CDC’s rule and to make sure struggling tenants got assistance.

The CFPB had never held any authority over renters or rent collection previously, and the change was welcomed by poverty and consumer advocates.

The banking industry has been critical of the more aggressive posture of the bureau, partly because the changes are happening under a temporary director.

“At the very least, if he’s going to make these changes and be in this role for an extended period of time, he should appear in front of Congress as is statutorily required,” said Richard Hunt, president and CEO of the Consumer Bankers Association, a trade group for the larger retail banks.

A CFPB spokesperson said Uejio’s actions “have reflected the urgency of the crises our nation is facing,” adding that moving slowly “would further put American families in harm’s way.”

Rohit Chopra, Biden’s choice for CFPB director, has himself signaled a more aggressive approach to the bureau’s mission once he’s confirmed by the Senate. Chopra is a former bureau employee and currently a commissioner on the Federal Trade Commission. The White House reportedly has not wanted him to move over to the CFPB until a replacement can be found for him at the FTC.

Another familiar face will also return in a new role. On Tuesday the White House announced it would put Cordray, the bureau’s first director under the Obama administration, in charge of the Federal Office of Student Loans. The amount of student loan debt owed by Americans has grown to $1.7 trillion.

While Corday will be working under the Department of Education, his position is likely to restore the working relationship between the bureau and the DOE. Trump’s Education Secretary Betsy DeVos had effectively cut off the CFPB from any authority over student loans.

“Appointing Cordray to lead (the office) is a great step, showing that the administration is serious about what’s necessary to protect borrowers and address the student debt crisis,” said Seth Frotman of the Student Borrower Protection Center, and the former top official at the CFPB over student loan issues.