The weapons that contain no registration numbers and require no background checks increasingly have shown up at crime scenes. 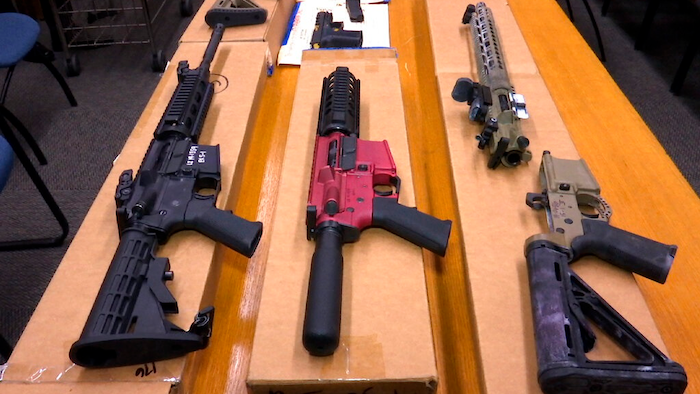 This Nov. 27, 2019, file photo shows "ghost guns" on display at the headquarters of the San Francisco Police Department in San Francisco. Families of those killed and wounded in a rural California shooting rampage in 2017 are suing manufacturers and sellers of "ghost gun" kits that provide easy-to-assemble firearm parts that make it difficult to track or regulate owners.
AP Photo/Haven Daley, File

LOS ANGELES (AP) — Families of those killed and wounded in a rural California shooting rampage three years ago are suing manufacturers and sellers of “ghost gun” kits that provide easy-to-assemble firearm parts that make it difficult to track or regulate owners.

A pair of wrongful death lawsuits filed last month in separate state courts accuse 13 defendants of negligence, public nuisance and violation of business codes. The cases were brought by Brady United, the national nonprofit that advocates against gun violence, which said Monday that the suits are the first of their kind in the nation.

Ghost guns, which are cobbled together with various parts often purchased separately, have long been popular among hobbyists and firearms enthusiasts. The weapons that contain no registration numbers that could be used to trace them and require no background checks increasingly have shown up at crime scenes, gun control advocates say.

“There is an ample and thriving gun market in this country in which law abiding citizens can get guns thru proper channels. This is an industry that appears aimed at supplying people who can’t legally have guns,” Brady’s chief counsel Jonathan Lowy said Monday.

Cody Wilson, the director of Ghost Gunner Inc., one of the defendants, called the suits “low effort attempts to confuse the public and frustrate the lawful purpose of making your own firearms in California.” The other 12 defendants, most of them online retailers, didn’t immediately respond to requests for comment.

The plaintiffs include the families of Michelle McFayden, Diana Steele, Daniel Le, and Joseph McHugh, who died in the November 2017 shooting, and Francisco Cardenas, who suffered serious injuries.

Investigators say the shooter, Kevin Neal, manufactured an unregistered rifle used in the rampage with ghost gun parts despite being ordered by a judge to surrender all his weapons as part of a restraining order.

Neal, 44, killed his wife and four others before he died by suicide while being chased by deputies in Northern California's Tehama County. Neal targeted an elementary school while randomly shooting at homes and motorists in a sprawling rural subdivision about 130 miles (209 kilometers) north of Sacramento.

“Defendants knew when they entered this business that they would foreseeably be supplying criminals, killers, and others whose possession of firearms pose an unacceptably high threat of injury or death to others,” the California court filings say. Their marketing materials “intentionally targeted prohibited persons and other dangerous individuals like Neal. Such tactics and practices were unfair, immoral, unethical, oppressive, and unscrupulous.”

The cases were filed in Superior Court of Orange County and San Bernardino County. It's possible the two lawsuits could be consolidated into a single trial, Lowy said.

The court filings ask for unspecified compensatory and punitive damages.

The U.S. Bureau of Alcohol, Tobacco, Firearms and Explosives doesn’t consider the do-it-yourself kits to be firearms, so buyers don’t have to undergo the usual background checks and in most states the guns are not required to have serial numbers.

In September California Attorney General Xavier Becerra filed a lawsuit asking a federal judge to order ATF to change its policy, arguing that it violates the common definition of a firearm under federal law.

Death Toll Up to 12 in Poland Mine Accidents