The company is seeing more demand for chips, but the outbreak will likely hurt mobile and household device sales. 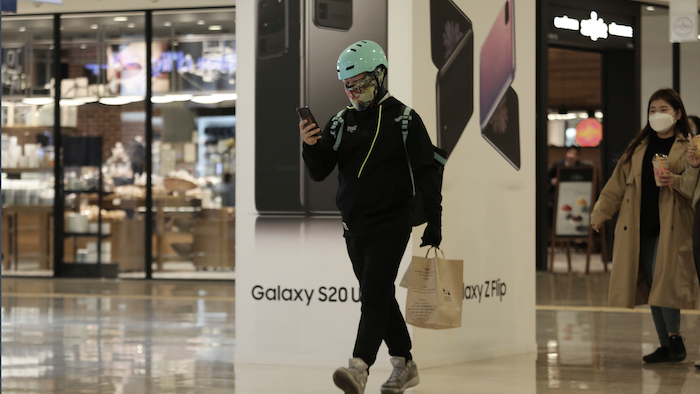 A man passes by an advertisement of Samsung's Galaxy S20 Ultra and Galaxy Z Flip smartphones at its shop in Seoul, April 28, 2020.
AP Photo/Ahn Young-joon

SEOUL, South Korea (AP) — Samsung Electronics Co. said Wednesday its operating profit for the first three months of 2020 rose 3.4% from a year earlier driven by increasing demands for computer chips. However, the company predicted its profit would decline in the current quarter with the coronavirus pandemic eating into global sales of smartphones, TVs and other products.

The South Korean technology giant said it reported an operating profit of 6.4 trillion won ($5.2 billion) for the January-March quarter. The company’s revenue rose 5.6% from a year earlier to 55.3 trillion won ($45.4 billion).

Samsung, which has dual strength in parts and finished products, has seen the demand for chips used in computers and servers increase as broadening outbreaks have force more people around the world to work from home.

However, the company said its profit will likely decline in the April-June quarter with the pandemic pushing down the sales of mobile and household devices.

“Sales and profits of set products business, including smartphones and TVs, are expected to decline significantly as COVID-19 affects demand and leads to store and plant closures globally,” the company said in a news release.

“Memory demand is expected to remain robust for servers and PCs as more people work from home, but it is possible the mobile market may soften. Earnings from OLED screens are likely to be weaker due to a stagnant smartphone market,” it said.