EU Appeals to US to Avoid Tariff War 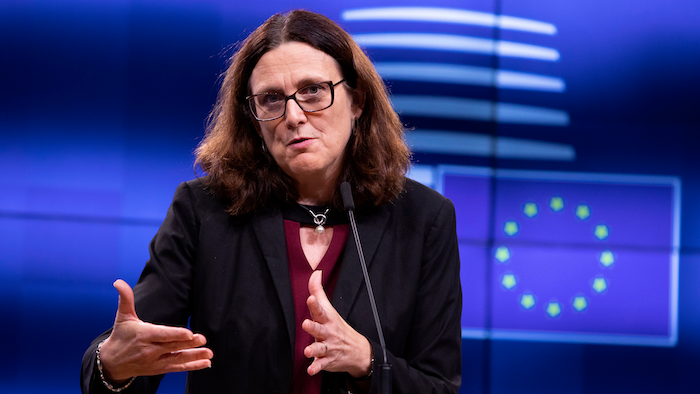 European Commissioner for Trade Cecilia Malmstrom speaks during a media conference after an informal lunch of EU trade ministers at the Europa building in Brussels, Oct. 1, 2019.
AP Photo/Virginia Mayo

BRUSSELS (AP) — The European Union made a last-ditch appeal Wednesday to U.S. President Donald Trump to avoid any tit-for-tat tariff war as the global trade governing body prepares to issue a ruling that could allow him to impose billions in duties on EU produce.

The World Trade Organization said in May last year that Europe illegally subsidized planemaker Airbus, hurting U.S. competitor Boeing. It is due to rule Wednesday how much the Trump administration can seek in compensation in the form of new tariffs against the EU.

The EU products that could be targeted include wine, cheese and olives, which are produced in many countries involved in the Airbus consortium.

The EU won a similar WTO case accusing the U.S. of illegally subsidizing Boeing, but a ruling allowing possible retaliation is still months off.

"We should avoid imposing tariffs on one another. This would be damaging to our economies, to global trade and the broader aircraft industry," European Commission spokeswoman Mina Andreeva said.

"We are ready to work with (the U.S.) on a fair and balanced solution for our respective aircraft industries. We are still ready and willing to find a fair settlement, but if the U.S. decides to impose authorized countermeasures, the EU will do the same," she told reporters. The commission, the EU's powerful executive arm, runs trade negotiations on behalf of the 28 EU member countries.

Trans-Atlantic trade tensions have soared since Trump slapped tariffs on European steel and aluminum last year. He said the move was to protect U.S. national security interests, but the Europeans claim it is simply protectionism and breaks global trade rules.

In response, the EU introduced "rebalancing" tariffs on about 2.8 billion euros ($3 billion) worth of U.S. steel, agricultural and other products.

Trump has also threatened to slap duties on European automakers.

In an attempt to head off a tariff war, European Commission President Jean-Claude Juncker traveled to Washington to meet Trump last year, and a rough outline of a limited trade deal on industrial products emerged. But little progress has been made, and both sides accuse each other of dragging their feet.

The U.S. envoy to Brussels, Gordon Sondland, said last month that trans-Atlantic trade talks have "not borne a lot of fruit" recently. He said that "with the current (EU) leadership we're at somewhat of an impasse." A new commission team is set to take office on Nov. 1. 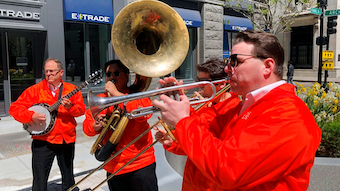 Consumers are not only sustaining their spending but increasing it.
May 23rd, 2022