The vital navigation lock was closed Sept. 5 after an investigation revealed cracked concrete. 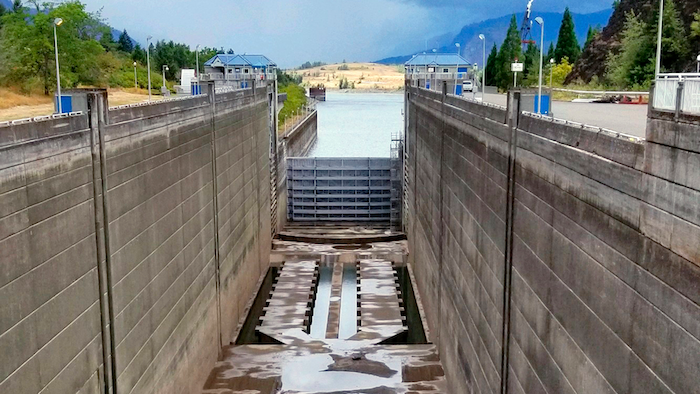 This Sept. 8, 2019, photo shows a dry boat lock on the Bonneville Dam on the Columbia River at Cascade Locks., Ore.
Megan Innes/U.S. Army Corps of Engineers via AP

PORTLAND, Ore. (AP) — Huge barges carrying wheat, wood and other goods will remain at a standstill for the rest of the month while workers repair a critical navigation lock at the Bonneville Dam on the Columbia River.

The closure comes at the peak of wheat harvest and could be devastating for farmers who ship to Asia via barges that fill up at more than two dozen grain elevators along the river network as far inland as Lewiston, Idaho.

The crack in the concrete sill was discovered after the lock was drained of water over the weekend. On Monday, emergency repair crews were working to demolish the faulty concrete section so repairs could begin, according to Chris Gaylord, a spokesman for the Army Corps of Engineers. Work on the lock also will include drilling holes for rebar, forming the new sill structure and allowing time for the concrete to cure.

It's not known what caused the damage. According to the Portland District engineering team, the damage they observed was unusual, and the annual inspections of the dam, last performed in January 2017, did not reveal any abnormalities.

The closure means that barges headed upstream can't travel the Columbia River past the Bonneville Dam and those headed downriver toward the Pacific Ocean are stuck behind the Bonneville — effectively halting all river commerce in a vast swath of the Pacific Northwest from eastern Oregon and Washington to Idaho.

The Bonneville Dam is the first in a series of eight dams on the Columbia and Snake Rivers, which together make up a watery highway for goods flowing into and out of the region from the Pacific Rim.

Kristin Meira, executive director of the Pacific Northwest Waterways Association, said in an email Wednesday that the river system is one of the region's and nation's chief cargo transportation arteries, and the failure of any one lock can have a huge and potentially catastrophic impact on the economy of the Pacific Northwest and a number of sectors throughout the nation.

"Our two largest barge lines on the Columbia Snake River System report over 100,000 tons of stranded product above Bonneville Dam," she said. "This incident also shows the critical need to fund a comprehensive maintenance and rehabilitation program for the eight locks."

Eight million tons of cargo move on the Columbia and Snake rivers each year, and 53% of U.S. wheat exports were transported on the Columbia River in 2017, the latest year for which statistics are available, Meira said.

About $2 billion in commercial cargo travels the entire system annually, according to the U.S. Army Corps of Engineers, and it's the No. 1 export gate in the U.S. for wheat and barley and the No. 2 export gate for corn.

Navigation locks allow the large barges to pass through the massive concrete dams that were built across the Columbia and Snake rivers decades ago to generate hydroelectricity for the U.S. West.

A boat enters a sealed chamber filled with water — essentially like a giant concrete bathtub — and then the water level is lowered or raised to match the level of the river on the other side of the dam. Then the lock opens on the other side and the boat exits.