Samsung Scion Could End Up Jailed

About a year and a half after being released from jail, Samsung's de facto chief faces a retrial on corruption charges. 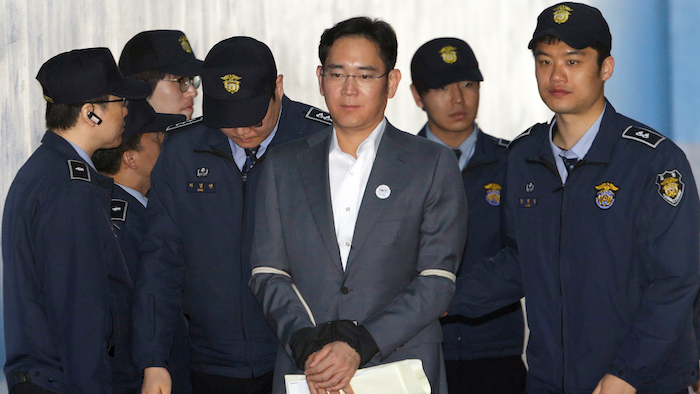 SEOUL, South Korea (AP) — About 1 1/2 year after being released from jail, Samsung's de facto chief Lee Jae-yong will face a retrial on corruption charges, a key part of the explosive 2016 scandal that prompted months of street rallies and toppled South Korea's president.

The retrial at the Seoul High Court was ordered Thursday by South Korea's Supreme Court, which ruled that the total amount of Lee's bribes provided to ex-President Park Geun-hye and her confidante had been underestimated.

The ruling simply means Lee may go to prison again, but it's still unclear what that means for Samsung, the world's largest manufacturer of computer chips, smartphones and TVs.

Some say it would further increase uncertainty surrounding Samsung and even the wider South Korean economy, while others downplay such worries noting not much happened during his time in jail.

A look at the latest saga of Lee and his business empire:

In 2017, Lee, the 51-year-old vice chairman of Samsung Electronics, was sentenced to five years for offering 8.6 billion won ($7 million) in bribes to Park and her longtime friend Choi Soon-sil when Park was in office. In return for the bribes, the court ruled that Lee, the only son of Samsung's ailing chairman Lee Kun-hee, sought government support to solidify his control over the company.

But in February 2018, Lee was freed after the Seoul High Court reduced his term to 2 1/2 years and then suspended the sentence, overturning key convictions and shaving the amount of his bribes to 3.6 billion won ($3 million).

In sending the case back to the high court, the Supreme Court said the amount of Lee's bribes had been undervalued. It said the money that Samsung spent to purchase three race horses used by Choi's equestrian daughter and fund a winter sports foundation run by Choi's niece should also be considered bribes.

Theoretically, the verdict opens a possibility that Lee could be convicted of even higher bribes. Prosecutors, who had requested a 12-year jail term for Lee, said he embezzled the money from Samsung corporate coffers.

Under a sentencing guideline set by the Supreme Court, courts in South Korea are told to issue prison terms of four to seven years for those convicted of embezzling more than 5 billion won ($4 million) of official funds. By law, a prison term of more than three years cannot be suspended.

However, some observers say a suspended sentence is still possible for Lee because South Korea's law also grants courts the rights to exercise "discretionary mitigation" in criminal punishment.

While many other South Korean business tycoons have been convicted of corruption, business irregularities and other crimes, they often receive relatively light punishment with judges citing possible ramifications for the country's economy. Last year, the Seoul High Court issued a suspended prison sentence for Lotte Group Chairman Shin Dong-bin though it convicted him of providing 7 billion won ($5.7 million) in bribes to Park in exchange for business favors.

Park, who has been implicated in two other scandals, faces the prospect of serving more than 30 years in prison. Choi was earlier sentenced to 20 years.

A statement from Lee's Samsung Electronics said it regrets "causing concern to (Korean) people" and that it wouldn't repeat past mistakes. Lee In-jae, who heads the legal team representing Lee Jae-yong, called the court's decision "regrettable" and said it should be noted that some justices expressed dissenting opinions about the bribery charges.

Samsung's influence on the South Korean economy is immense. Samsung Electronics represents about 20% of South Korea's entire stock market value and about 25% of the country's total exports. Dozens of Samsung affiliates run everything from construction, insurance and credit card companies, hospitals, an amusement park to baseball and soccer clubs.

"Who can bear the aftermath if Samsung is shaken?" South Korea's largest Chosun Ilbo newspaper said in an editorial Friday.

Some experts note Lee's verdict came as Samsung faces many external challenges such as slowing demand, the trade war between Washington and Beijing and Japan's strengthened export controls for chemicals needed to manufacture semiconductors and display screens — main export items for Samsung.

Samsung said last month its operating profit for the April-June quarter plunged 56% from last year to 6.6 trillion won ($5.5 billion) due to declining computer chip prices and sluggish demand for mobile devices. In June, Lee vowed to keep up robust investments in key businesses, calling for "unwavering focus on long-term, fundamental leadership in technology."

"Samsung is now at a critical juncture as it must find future-growth businesses and make a breakthrough ... and it's time for a group owner to make a decision that can bear the risks" for those new businesses, said analyst Lee Sang-ho at the Seoul-based private Korean Economic Research Institute. "Considering Samsung's status in our economy, I would say the absence of a chairman would cause a not-good effect on the South Korean economy as well as on Samsung."

Park said Samsung's specialized management of each division would run smoothly with or without Lee. He said Samsung showed no signs of trouble during the 11 months Lee spent in jail until his release early last year, a period that saw the company executing a major deal to acquire Harman International, famous for its JBL wireless speakers. Prison terms have never stopped South Korean corporate leaders from relaying their management decisions from behind bars, Park added.

"What has Lee done anyway to prove his chops as a corporate leader since taking over from his ailing father a few years back? He's not like Steve Jobs," Park said. "It's expected that the retrial could take at least six months and maybe even more than a year, and it would actually be a problem if Samsung spends more energy on preparing Lee's personal legal battle ... than on improving its business."

Oh Il-sun, director of the Korea CXO Institute, said Lee's absence would likely make it difficult for Samsung to make a speedy, bold decision on its long-term investment plans. But Oh said some troubles at Samsung like declining earnings won't likely affect the South Korean economy too much.

Park said a stringent punishment for Lee would go a long way in curbing the excesses of "chaebol," a privileged group of family-owned conglomerates such as Samsung that dominate South Korea's economy and have been tied to corruption and nontransparent managements that critics say often favor the owning family over shareholders.

"That would send a positive signal to foreign investors," Park said.