Three electric scooter riders have died in the city since May in crashes that involved a public bus, an SUV and a car. 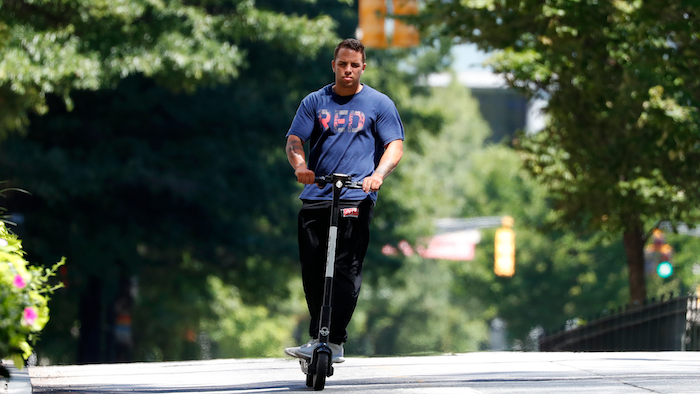 ATLANTA (AP) — Atlanta is banning electric scooters in the nighttime hours during what's been a deadly summer for riders.

The ban comes as cities across the nation struggle to regulate the companies renting the devices and keep riders safe.

In Atlanta, three riders have died since May in crashes that involved a public bus, an SUV and a car. Police in the Atlanta suburb of East Point say a fourth rider was killed there Tuesday in a collision involving his scooter and a truck.

"Sadly, we have seen a pattern in the recent and tragic fatalities involving scooters — they all occurred after sunset," Atlanta Mayor Keisha Lance Bottoms said in a statement Thursday.

City officials on Thursday announced a ban on electric scooters and electric bikes from 9 p.m. until 4 a.m. daily. The ban takes effect Friday.

"This environment didn't exist 14 months ago or 12 months ago — this is a brand new thing," Tim Keane, Atlanta's commissioner of city planning, said in an interview Thursday.

"We want this to be temporary," he said. "We hope that this ban is very temporary."

City officials have asked e-scooter vendors to disable the devices during the hours they're banned, the mayor said. The companies are cooperating, and "I've heard no pushback at all," Keane said.

"We think it's a reasonable step as a temporary measure while the scooter program is re-examined," said Nima Daivari, Lime's community affairs manager for Georgia. San Francisco-based Lime has one of the largest fleets in Atlanta, with an average of about 1,800 available for rent last month. "They see the value here, and Atlanta is a city that's notorious for traffic congestion."

Late-night and early-morning travel, especially between midnight and 5 a.m., is "many times more dangerous due to impaired road users, fatigue and poor visibility," Bird said. The company has managed its service hours to avoid late night riding, and will comply with Atlanta's new guidelines, it added.

Jason Layfield was visiting Atlanta from Guam on Thursday, and rode a motorized scooter for the first time to get back and forth from his hotel and the convention he's attending.

"I don't see it necessarily as a bad thing to limit riding at night," he said. "I don't know that that's 100% necessary, but I can understand how it may be a good idea."

Other communities, including Dallas; Nashville, Tennessee; and Athens, Georgia, have recently considered some form of regulation of scooters, partly over concerns about safety.

Chicago has a nighttime ban similar to Atlanta's new policy. Scooters there must be inoperable after 10 p.m. and off the streets by midnight, said Isaac Reichman, a Chicago Department of Business Affairs and Consumer Protection spokesman. They're allowed to operate at 5 a.m. the next day, he said.

The federal Centers for Disease Control and Prevention reviewed medical records from scooter riders in Austin, Texas, in an effort to learn more about the risks associated with riding them. Researchers in the Austin study identified 192 scooter-related injuries in three months in 2018.

Nearly half of those were head injuries, including 15% that were traumatic brain injuries, the CDC said in its report. The researchers also found a troubling trend: Less than 1% of the injured riders wore a helmet.

Safety concerns are driving the nighttime bans in both Chicago and Atlanta, officials said.

"We embrace scooters and bikes and we want people to be able to get around on them, particularly people who are starting to depend on them for access to transit and their jobs and things like that," Keane said. "Where we have the chance to make them safer, we have to do that."