The officer driving the electric vehicle had just six miles of charge left when he took off in a high-speed pursuit.

One reason electric vehicle adoption has been slow is the range. People are worried about the charge. They think the car will run out of juice, leaving them stranded. This story isn't going to help the cause.

Last week, police officer Jesse Hartman with the city of Fremont in California was in pursuit of a suspect when his 2014 Tesla Model S 85 ran out of power.

According to the Mercury News, authorities don't know why the squad car wasn't fully charged before Hartman got behind the wheel. The electric squad car usually has up to 50 percent charge remaining after each shift.

The officer attempted to pull over a driver wanted in connection with a crime. The suspect drove off, reaching speeds up to 120 mph. When the suspect took off, the officer realized that he had just six miles of battery left on the car, according to a recording from Broadcastify.

Other units took over the pursuit, but the chase was called off due to safety concerns. The police found the suspect's car abandoned. The officer had to find a local charger just to make it back to the station.

Particularly lousy timing, as the cruiser was part of a pilot program to see if electric vehicles are suitable for law enforcement on a larger scale.

In January 2019, Fremont's police department became the first police agency in the nation to incorporate a Tesla into its patrol fleet. It bought it used for $61,000 and spent 12 months and another $4,400 retrofitting it. Maybe add that to the shift-change checklist. 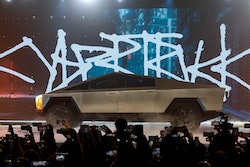