The retractable door handles sit flush with the body of the Model 3 — and, in the event of record-breaking winter temperatures, can get stuck there.

Tesla started 2019 with some positive momentum. Model 3 production and delivery levels were up and the company actually posted a profit in two straight quarters. Those results, and unseasonably mild December and early January weather, may have allowed the company to forget that winter is coming.

First, the company announced a 7 percent reduction in headcount. About a week later a polar vortex hit major portions of the country, sending a number of Tesla owners to social media seeking assistance not with starting their Model 3s, but just trying to get in them.

These cars feature a very cool retractable door handle design that sits flush with the body. While the doors can be set to automatically open as the driver approaches, the handle can also be used by simply pushing on its’ opposite edge. These functions worked well until temps dipped well below zero and wind chill numbers made it feel like the Arctic Circle.

At this point, the Tesla door handles started to freeze in place. The best case scenario meant owners had to resort to giving the door a couple good pounds, or pressing hand warmers against the handle surface. In other instances, the door would open, but the handle wouldn’t retract to allow for closing the door.

But here’s what is.

When a company is trying to shift a paradigm with a comparable offering that costs more, demands different approaches and makes bold claims about its performance and reliability, it simply can’t afford to arm a social media-savvy customer base with something negative to talk about … because they will.

So instead of discussing a new battery technology acquisition or higher delivery numbers, we’re talking about door handles. 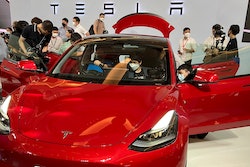