One key to the success of the new technique is that it is a continuous-flow reactor. 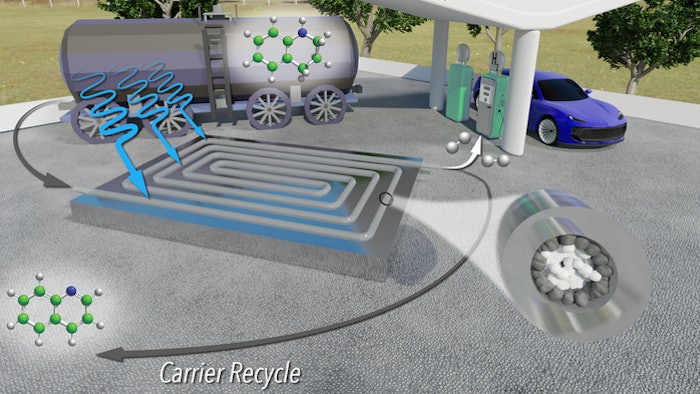 Researchers from North Carolina State University have developed a new technique for extracting hydrogen gas from liquid carriers which is faster, less expensive and more energy efficient than previous approaches.

“Hydrogen is widely viewed as a sustainable energy source for transportation, but there are some technical obstacles that need to be overcome before it can be viewed as a practical alternative to existing technologies,” says Milad Abolhasani, corresponding author of a paper on the new technique and an associate professor of chemical and biomolecular engineering at NC State. “One of the big obstacles to the adoption of a hydrogen economy is the cost of storage and transportation.”

Hydrogen fuel does not result in CO2 emissions. And hydrogen refueling stations could be located at existing gas stations, taking advantage of existing infrastructure. But transporting hydrogen gas is dangerous, so hydrogen needs to be transported via a liquid carrier. A key obstacle for this strategy is that extracting hydrogen from the liquid carrier at destination sites, such as fueling stations, is energy intensive and expensive.

“Previous research has shown that it is possible to use photocatalysts to release hydrogen gas from a liquid carrier using only sunlight,” Abolhasani says. “However, existing techniques for doing this were laborious, time consuming and required a significant amount of rhodium – a metal that is very expensive.”

“We’ve developed a technique that applies a reusable photocatalyst and sunlight to extract hydrogen gas from its liquid carrier more quickly and using less rhodium – making the entire process significantly less expensive,” says Malek Ibrahim, first author of the paper and a former postdoctoral researcher at NC State. “What’s more, the only byproducts are hydrogen gas and the liquid carrier itself, which can be reused repeatedly. It’s very sustainable.”

One key to the success of the new technique is that it is a continuous-flow reactor. The reactor resembles a thin, clear tube packed with sand. The “sand” consists of micron-scale grains of titanium oxide, many of which are coated with rhodium. The hydrogen-carrying liquid is pumped into one end of the tube. The rhodium-coated particles line the outer part of the tube, where sunlight can reach them. These particles are photoreactive catalysts that, in the presence of sunlight, react with the liquid carrier to release hydrogen molecules as a gas.

The researchers precisely engineered the system so that only the outer grains of titanium oxide are coated with rhodium, ensuring the system uses no more rhodium than is necessary.

“In a conventional batch reactor, 99% of the photocatalyst is titanium oxide and 1% is rhodium,” Abolhasani says. “In our continuous flow reactor, we only need to use 0.025% rhodium, which makes a big difference in the final cost. A single gram of rhodium costs more than $500.”

In their prototype reactor, the researchers were able to achieve a 99% yield – meaning that 99% of the hydrogen molecules were released from the liquid carrier – in three hours.

“That’s eight times faster than conventional batch reactors, which take 24 hours to reach 99% yield,” Ibrahim says. “And the system should be easy to scale up or scale out to allow for catalyst reuse on commercial scale – you can simply make the tube longer or merge multiple tubes running in parallel.”

The flow system can run continuously for up to 72 hours before its efficiency decreases. At this point, the catalyst can be “regenerated” without removing it from the reactor – it’s a simple cleaning process that takes about six hours. The system can then be restarted and run at full efficiency for another 72 hours.

NC State has filed a provisional patent for the technology.