The largest economic development project in state history is drawing opposition from an unusual source. 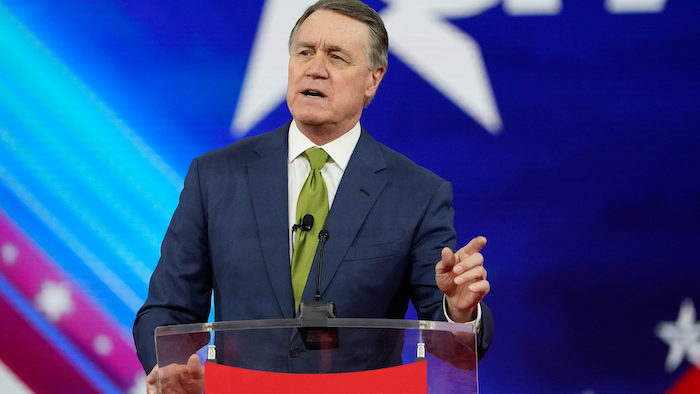 Perdue — also a former corporate executive — is looking to unseat Georgia governor and fellow Republican Brian Kemp in this year's gubernatorial race. The campaigns have traded attacks on a range of issues in a contest spurred by former President Donald Trump following his election defeat in the state.

On Monday, Perdue ripped into Rivian Automotive's planned battery and assembly plant east of Atlanta, which Kemp was expected to tout on the campaign trail as a major achievement.

The Irvine, California-based electric vehicle manufacturer announced last year that it would build the facility at the Georgia site, where it expects to eventually employ more than 7,500 workers and produce up to 400,000 vehicles a year. State and local officials have yet to disclose the value of financial incentives they offered to lure the project, but the figure is expected to run into the hundreds of millions of dollars.

“This bad deal is nothing more than a scheme by Kemp to promote himself in an election year at Georgians’ expense," Perdue said in a statement. “Kemp thought he could get away with this under the guise of ‘economic development,’ but all he is doing here is selling us out and lining George Soros’s pockets.”

Soros — a billionaire investor and Democratic mega- donor — is a frequent target of right-wing conspiracy theories. He bought a large stake in Rivian recently.

Perdue planned to meet later Tuesday with local residents opposed to the project over concerns about traffic, loss of farmland, and other development issues. The plant is set to go up on a 2,000-acre (809-hectare) site in Morgan and Walton counties about 45 miles (72 kilometers) east of Atlanta along Interstate 20.

An email to Rivian was not immediately returned.

“It is unfortunate that he's choosing to play politics with 7,500 jobs, $5 billion worth of investment in a local community — and in a rural community — that needs more jobs and more economic development,” he said at a news conference on Tuesday.

Economic incentives to lure corporations are common, though they do face criticism, often from politicians on the left. The Rivian deal is facing opposition from the right, including Republican Congressional candidates from the area.

Perdue's criticism, additionally, comes despite a lengthy career in business that included stints as CEO of Reebok and two other companies. The Georgia Chamber of Commerce cited Perdue's “outstanding record of defending free enterprise, creating jobs, and supporting small businesses during the COVID-19 crisis” in its 2020 endorsement of his Senate reelection bid. Perdue went on to lose to Democrat Jon Ossoff in a runoff.

The chamber endorsed Kemp for governor before Perdue announced his candidacy. CEO Chris Clark said in a statement Monday about the Rivian project that “recent efforts by candidates from both parties to criticize economic growth projects, local efforts or major sporting events for political gain are counterproductive and harmful to the long-term economic prosperity for our communities.”

Perdue also accused Kemp of “ignoring locals’ concerns" about the Rivian plant and "trying to cut them out of the process.” The state recently agreed to take over the approval process for construction of the plant from local officials.

Hall said the site has long been marketed for industrial development, and the state had to keep some parts of its negotiations secret because of competition for the plant from other states. But Georgia economic development officials have made it clear that they are committed to hearing directly from local residents about their concerns, he said.

He said similar projects in the state in the past have had a “positive impact,” citing a Kia auto plant in West Point, Georgia as an example.

“That's a generational project that changes lives for the better,” he said.