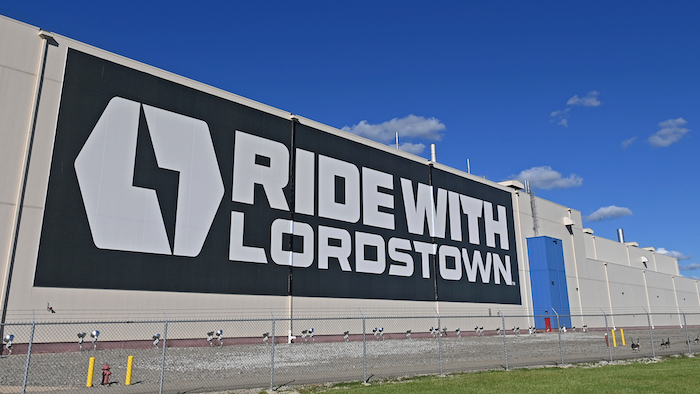 SILVER SPRING, Md. (AP) — Shares in Lordstown Motors took another beating after the troubled electric truck maker revealed an underwhelming forecast for truck deliveries — one that would depend on raising more money and finalizing an partnership agreement with the manufacturer Foxconn.

The shares, which traded above $30 per share just a year ago, skidded 20% Monday to $2.57 after the company said it expected to produce just 3,000 of its flagship Endurance electric trucks before the end of 2023.

That's a paltry figure for a company that has to compete with giants like General Motors and Ford — who are investing massively in electric trucks — as well as startups flush with cash.

“Lordstown production guidance was a disaster and adds gasoline to the growing inferno the Street has witnessed with the name over the last year,” said Dan Ives, an analyst at Wedbush Securities.

The huge sell-off in shares of Lordstown Monday took place as the stock of other electrical vehicle makers soared on fears that a widening conflict with Russia over Ukraine would lead to a spike in gasoline prices.

Lordstown has yet to sell a vehicle and lost $81 million in the fourth quarter, or 42 cents per share. That's better than the 77 cent loss industry analysts expected, but almost double the loss over the same period last year.

On a conference call with investors, Lordstown executives said they were still working on a partnership agreement with Foxconn, to which they sold a former GM plant in Ohio near Youngstown for $230 million last fall. Foxconn executives said a partnership with the world’s largest electronics maker and contract manufacturer would help it get its production scaled up faster, help to bring its costs down and provide expertise in hardware and software integration critical to EVs.

Lordstown also said it would need to raise between $200 and $250 million to execute its 2022 operating plan. Coming from a company with a long list of recent troubles, investors headed for the exits once again.

In June, the fledging automaker’s top two executives stepped down amid doubts over the number of orders placed for its vehicles. In July, the company acknowledged receiving two subpoenas from federal regulators and also that prosecutors in New York had opened an investigation into the company.

The Securities and Exchange Commission asked in a pair of subpoenas for documents related to the company’s merger with DiamondPeak, a special purpose acquisition company.

After the company acknowledged that it had no firm orders for its vehicles, it said that the U.S. Attorney’s Office for the Southern District of New York was “investigating these matters.”

Meanwhile, Ford has at least 200,000 orders for its electric F-150, due this spring, and General Motors unveiled its Chevy Silverado at a show earlier this year. Stellantis, formerly Fiat Chrysler, has promised an all-electric Ram while electric truck startup Rivian raised nearly $12 billion from its public offering in November.

Pickups are among the most popular vehicles in the nation. Ford’s F-Series is traditionally the top-selling vehicle in America, followed by Stellantis’ Ram pickup and the Silverado.

Industry analysts say the intense competition in the electric pickup market means that battery-powered vehicles are moving into the mainstream after years of confinement to luxury or smaller vehicles.