Only 1% of the nation's 480,000 school buses are electric, but there are signs that could be changing. 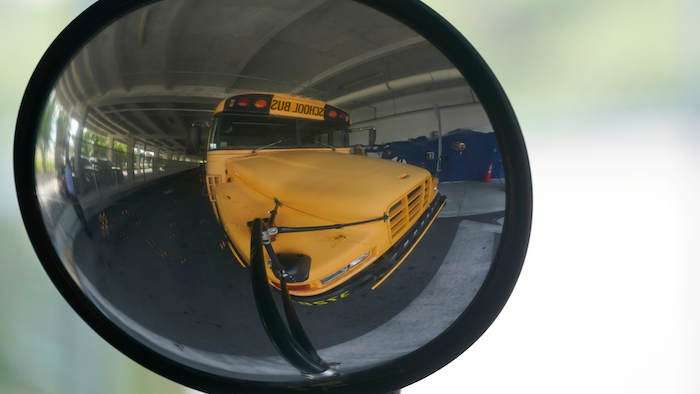 BOSTON (AP) — For several years, the Miami-Dade County Public Schools had toyed with replacing some of its 1,000 diesel buses with cleaner electric vehicles. But school leaders said the change would be too costly.

Then 12-year-old student Holly Thorpe showed up at a school board meeting to tout the benefits of going electric and returned to encourage the district to apply for a state grant.

Two years on, the school board on Wednesday approved a district plan to use state money to replace up to 50 diesel buses with electric models over the next several years.

Thorpe is overjoyed the district is making the switch. “It wasn't imaginary any more,” she said. “It just wasn’t like an idea. It was coming to life.”

The transition is part of a small but growing movement led by parents, students and lawmakers to purchase electric school buses to improve the health of students and cut planet-warming carbon dioxide emissions.

Roughly 25 million children ride school buses every year. And though only about 1% of 480,000 U.S. school buses are electric, there are signs the push to abandon diesel buses is gaining momentum:

— Late last year, the World Resources Institute announced a $37.5 million Bezos Earth Fund grant to help electrify all school buses in the country by 2030. The nonprofit will work over the next five years on the project with school districts, communities, environmental justice groups, utilities, bus manufacturers and policymakers.

— This year, a suburban Maryland district became the country's largest to commit to going completely electric. It plans to replace 1,442 diesel buses by 2035. The first 326 electric ones will be leased from Massachusetts-based Highland Electric Transportation.

— California, the country’s electric school bus leader, has funded the purchase of 1,167 and budgeted for another 1,000 over the next three fiscal years.

“This is an opportunity to make sure that we are doing all we can to protect kids health,” said California Energy Commission member Patty Monahan. “Some of these kids in parts of Los Angeles are on the bus for an hour, two hours a day. So we want to make sure that they are breathing clean air.”

At Twin Rivers Unified School District in Northern California, where diesel buses have been replaced by 40 electric buses and 34 that run on compressed natural gas, officials say clouds of dirty air have disappeared.

“One of the drivers said ‘I can’t believe the change I'm seeing in my lifetime,'” said Tim Shannon, the district's director of transportation services. “He said ‘I used to have to hold a handkerchief over my face to walk through the yard because of the thick diesel soot.’”

The electric buses are 60% cheaper to operate and will pay for themselves over time, Shannon said.

Some districts are planning to sell excess energy from batteries back to the grid, a move welcomed by utilities who themselves have launched programs to buy electric school buses. This summer, a school bus in a Massachusetts district delivered power back to the grid.

Efforts to replace diesel school buses are driven by the fact that children are more susceptible to health impacts of air pollution. Exposure to diesel exhaust, according to the EPA, can lead to asthma and respiratory illnesses and worsen heart and lung ailments, especially in children and the elderly.

A study of school buses in Washington state found using cleaner fuels or upgrading older diesel reduced children's exposure to airborne particles by as much as 50% and improved their health. Their findings suggest a nationwide switch to cleaner school buses could result in around 14 million fewer absences each year. The researchers at the universities of Washington and Michigan did not examine electric buses, which produce less local pollution than those using fossil fuels.

Lead author Sara Adar, an associate professor of epidemiology at the University of Michigan School of Public Health, said older diesel buses resulted in children in the Seattle area “getting higher levels of air pollution during their commute.”

“The pollutants those kids were experiencing also did seem to be linked to worse health,” she said. “We saw kids’ lungs weren’t quite as healthy.”

Diesel school bus engines are much cleaner, since the EPA implemented standards that required them to produce 90% less particulate matter. The EPA also has awarded $55 million to replace more than 2,700 old diesel school buses since 2012 and announced in October that $17 million more would be available.

With the improved standards, the diesel industry argues that switching to electric won’t significantly reduce emissions or address concerns about global warming — especially since electricity for buses still often comes from fossil fuels. They note that more than 54% of school buses are newer models with far fewer emissions.

“School districts should be able to choose the bus type and technology that works for them,” said Allen Schaeffer, executive director of the Diesel Technology Forum. “Some may find electric buses a good fit while others will stick with diesel and utilize low-carbon renewable fuels to cut their carbon footprint and other emissions.”

Advocates point out that nearly half of diesel buses are older ones that produce dangerous pollutants and are much more expensive to maintain. But they acknowledge the challenge is getting districts with older buses funds to transition to electric ones, which often cost three times more.

Many districts are eyeing funding from several bills in Congress.

Some states, including Florida and Virginia, are buying electric buses with billions of dollars from the Volkswagen settlement of its diesel emissions cheating scandal.

Miami-Dade Superintendent Alberto Carvalho said the district will use $11.6 million from the settlement to start buying electric buses, but said a full transition would be impossible without federal help.

“If we as a nation prioritize environmental protection, the reduction of greenhouse gases, the maximization of new technologies that reduce our dependency on carbon fuels, then the federal investment must incentivize these transitions with actual funding,” he said. “And that’s exactly what our country needs. That’s exactly what Miami needs.”