Solar panels on the roof of the vehicle generate enough energy to drive and live off the grid. 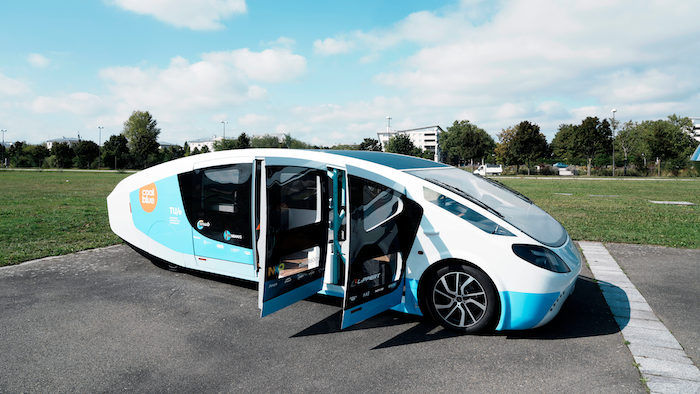 THE HAGUE, Netherlands (AP) — A group of Dutch students has reimagined van life and is hitting the road to Portugal. Just don't call their groundbreaking new solar-powered vehicle a campervan.

“We call it a self-sustaining house on wheels," said Lotte van Dasler, part of a team from the Technical University in the southern Dutch city of Eindhoven. "We are independent in terms of our energy. A camper isn’t, and we are. So I think that we make something new. New concept, new idea and new future — sustainable future.”

The sleek, odd-looking mobile home took a test drive Friday at a Renault facility outside Paris.

Solar panels on the roof of the vehicle, called Stella Vita, generate enough energy to drive and live off the grid. Its on-board information system shows just how much of that energy you use when you cook, take a shower or watch television.

“I think that is really cool because if you are aware of your energy consumption, you can make better choices to use less energy,” said team member Tijn ter Horst.

Once it's parked and its roof unfolded, it boasts 17.5 square meters (188 square feet) of solar panels — about as much as an average home's roof can accommodate.

The experimental road trip got off to a less than perfect start with drive train problems meaning the Stella Vita was carried on a trailer from Eindhoven to Brussels and from the Belgian capital to Paris.

At the test drive Friday near Paris, project manager Laura Van Houtum said, “We just want to make kilometers to make sure that these small troubles are not going to come up again."

But its creators are sure that their mobile home is part of a drive to tackle climate change by harnessing renewable energy sources.

“We want to show that the future that we think is ... 10 years ahead of us is already here," said Van Dasler.