Mercedes Vans Could Roll Away Unexpectedly

Highway regulators have received 11 complaints about the problem, including eight crashes and one injury.

DETROIT (AP) — The U.S. government's highway safety agency is investigating whether some Mercedes-Benz Sprinter vans can shift out of park and unexpectedly roll away.

The probe by the National Highway Traffic Safety Administration covers an unknown number of vans from the 2019 model year. The agency says it has 11 complaints about the problem including eight crashes and one injury.

Some of the complaints say the gearshift indicator shows that the vans are in park, but they were able to roll away. One hit a house in Salt Lake City in September of 2020. The injury crash happened in February near Pittsburgh, but the complaint gave no details.

Mercedes said in a statement Friday that it’s cooperating with the agency.

The agency says in documents posted Friday that it will investigate how often the problem happens and the safety consequences. The probe could lead to a recall. 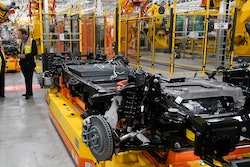