A series of rebates would incentivize installing charging infrastructure and charging during off-peak times. 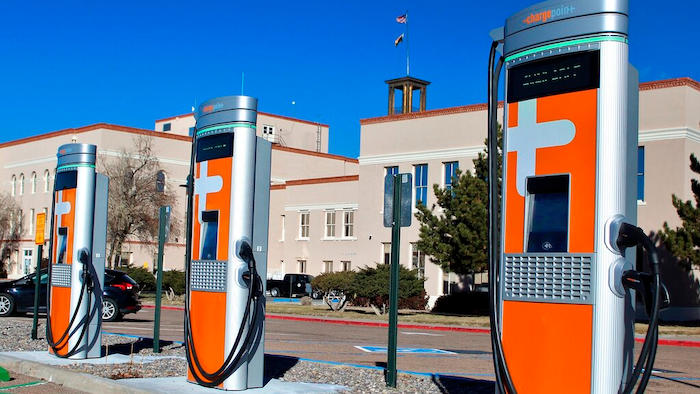 ALBUQUERQUE, N.M. (AP) — New Mexico’s largest electric provider has a plan for incentivizing the buildout of infrastructure that would be needed to bolster the use of electric vehicles in the expansive state where gas stations can be few and far between and charging stations are even more rare.

The Public Service Co. of New Mexico submitted the proposal to state regulators last week, saying the filing is the result of more than a year of research and community outreach. It details a series of customer rebate proposals for installing charging infrastructure and charging during off-peak times.

The application marks the first one filed by PNM under a 2019 law that requires public utilities to submit plans to the Public Regulation Commission by 2021 for how they will expand the infrastructure for electric transportation.

The law calls for regulators to take into account several factors, including how the plans will increase access to the use of electric vehicles by underserved communities and whether any reductions in pollution can be expected.

Utilities also can recover reasonable costs related to implementation of the plans through increases in customer rates. PNM estimates its program will cost close to $8.5 million over two years.

If regulators sign off, PNM officials said a full rollout could happen as early as 2022.

Julie Rowey, a PNM executive, pointed to data from the New Mexico Interagency Climate Change Task Force that found transportation was the second-largest contributor of greenhouse gases in the state. In testimony submitted to the commission, she said electrification of the transportation sector will be key to meeting the state's overall goals for reducing emissions.

“Many stakeholders in New Mexico understand the environmental and economic benefits of wider EV adoption, but there are still barriers to overcome in order to achieve these outcomes,” she said, noting that PNM's plan begins to address the challenges.

PNM currently owns and operates four free charging stations — two in Santa Fe, one at a visitor center in Silver City and another at an Albuquerque shopping mall.

A year ago, Gov. Michelle Lujan Grisham joined seven governors from other Western states in signing a memorandum of understanding to develop electric vehicle charging infrastructure along major highways in the region. The agreement includes Arizona, Colorado, Idaho, Montana, Nevada, Utah and Wyoming.

Lujan Grisham said at the time that the agreement signaled New Mexico’s commitment to electric vehicles.

In Santa Fe, the state on Monday announced the installation of 30 new charging stations for use by both government and private vehicles. The General Services Department oversaw the $1.5 million project and plans to ask the Legislature for another $1 million to continue its shift to electric vehicles.