The ride-hailing giants will be allowed to continue treating their California drivers as independent contractors for a few more months. 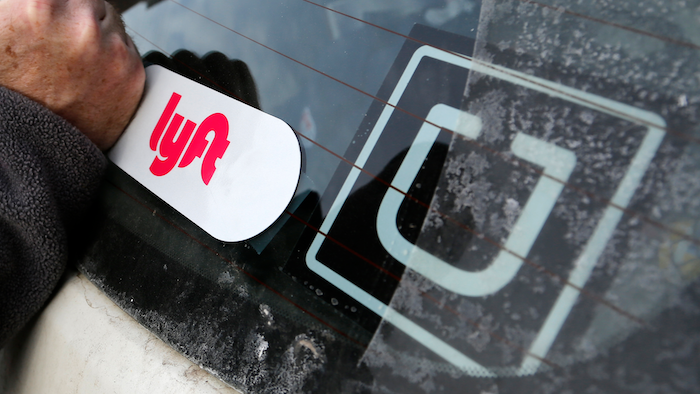 A Lyft logo is installed next to an Uber sticker in Pittsburgh, Jan. 31, 2018.
AP Photo/Gene J. Puskar, File

BERKELEY, Calif. (AP) — An appeals court has allowed ride-hailing giants Uber and Lyft to continue treating their drivers as independent contractors in California in a decision that will give the two companies a few more months to protect their business models in a key market.

The stay pauses a lower-court ruling that was scheduled to take effect at midnight on Friday and would have forced Uber and Lyft to treat all their drivers as employees. The companies said that such a change in status would be impossible to accomplish overnight and would have saddled them with a financial burden difficult for them to shoulder while they are still struggling to turn a profit.

Lyft told riders and drivers in a Thursday blog post that it planned to discontinue providing rides in California just before midnight without a stay. Uber CEO Dara Khosrowshahi had repeatedly said its service would have no choice but to stop providing rides in California if the state's law goes into effect because the company can't just flip a switch and quickly hire about 50,000 drivers as employees.

A California shutdown would have dealt a staggering blow to Uber and Lyft at a time when both are still sustaining huge losses while the pandemic has scared off millions of riders who aren’t traveling as much or are worried about possible exposure to the novel coronavirus.

The state represents a big part of Uber and Lyft’s businesses. It accounted for 9% of Uber’s worldwide rides and food delivery service before the pandemic caused people to avoid traveling. California is even more important to Lyft, which doesn’t operate outside of the U.S. besides Canada. It accounted for 21% of Lyft’s rides before the pandemic, but that figure dropped to 16% during the April-June period as more people stayed at home and there were few places to go.

Uber said the appeals court reprieve will ensure its “critical services won’t be cut off while we continue to advocate for drivers’ ability to work with the freedom they want."

Lyft applauded the stay in a statement while vowing “to continue fighting for independence plus benefits for drivers."

The stay delivered a temporary setback for California Attorney General Xavier Becerra after winning a lower-court ruling earlier this month that would have enforced new employment standards passed by state lawmakers last year.

“We’re confident in the facts of our case and we look forward to continuing our fight to defend the rights of workers across the state," Becerra's office said in a statement.

It will be business as usual for Uber and Lyft in California, at least for the next few months. But things could change during the fall, especially if they can't persuade California voters to approve a ballot initiative in November that will let the app-based companies continue to treat drivers as independent contractors, thus making them exempt from state laws mandating overtime, sick leave and expense reimbursement. But the law would provide drivers with “alternative benefits,” including a minimum wage and subsidies for health insurance.

Uber, Lyft and DoorDash have pledged a collective $90 million to campaign for the ballot measure this fall in addition to Postmates and Instacart's contributions of $10 million each. Opposition to the initiative is funded by organized labor, making it one of the more expensive and high-profile initiatives on the ballot this year.

Before votes weigh in on the initiative, the appeals court will hear oral arguments in an Oct. 13 hearing. But a ruling is unlikely until after the Nov. 3 election.

The ride-hailing companies have argued that they’re technology companies, not transportation companies, so drivers are not a core part of their business.

The threat of a California shutdown rankled drivers.