Workers are back on the job — with restrictions in place — at Toyota and Renault plants. 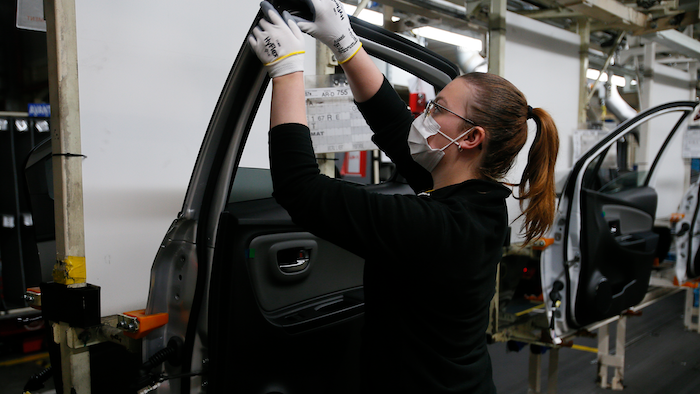 An employee wearing a face mask works on a door of a Yaris car at the Toyota car factory in Onnaing, France, April 28, 2020.
AP Photo/Michel Spingler

ONNAING, France (AP) — Masked and keeping their distance, French auto workers are returning to factory floors at Toyota and Renault in a cautious move toward reviving the virus-battered economy.

Renault restarted assembly lines Tuesday for its Zoe electric cars at a plant in Flins outside Paris, though only a quarter of staff is allowed in so far. The company – which is negotiating with the French government for billions of euros in potential bailout funds – has resumed some activity at plants in China, Spain, Portugal, Russia and Romania, but work remains halted in India, Latin America and most facilities in its home country of France.

In the northern town of Onnaing near Valenciennes, Toyota workers came back to work this week at a plant that used to churn out more than 1,000 Yaris cars a day. They are having their temperatures checked and given masks, and new social distancing rules are in place on the factory floor and cafeteria and other common spaces.